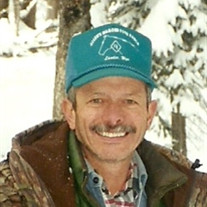 After a strong and brave fight against cancer for the last six years, during which he never lost his smile, Woody passed from this life in his home, surrounded by family and friends who loved him dearly. He was born in San Francisco, CA to Laura and Woodrow Ratliff and was later adopted by T.C. and Clydene Allen. Woody was raised in Lander, Wyoming where he developed his love of hunting, skiing, breaking horses, and playing the piano, organ, and trumpet. Upon graduating from the University of Wyoming, he attended Colorado State University, receiving his Doctor of Veterinary Medicine in 1971. It was while studying veterinary medicine that he became close friends with Gary Ailes whom would later become his lifelong business partner at Sierra Veterinary Hospital. Once established in Carson City, Woody’s hobbies expanded to include scuba diving, piloting single engine aircraft, instructing ski lessons with the Carson City Youth Ski Program, and mountain biking. Along with his love of the outdoors, he took advantage of every opportunity to travel, which included a year in Europe as a ski instructor, four months in Chile with the Rotary Group Study Exchange, and numerous travels through Mexico, Canada and the United States. Dr. Woody Allen served as a Nevada State Delegate for the American Veterinary Medical Association and in 2008 was recognized as the Nevada Veterinarian of the Year. He was a Past Commander and member of the Carson City Sheriff’s Aero Squadron, a Past President and member of the Rotary Club of Carson City, a member of the Ormsby Sportsman’s Association, and a proud member of the North American Sheep Hunters’ Association Grand Slam Club. Woody is survived by his loving wife of 30 years, Tish Allen, his beloved daughters Ashley Allen and Brandie Clark (Pat), his sons, who were dear to his heart, Jon (Karri) and Danny (Tasha) Couste. He was Papa Woody to his grandchildren Christian and Taylor Clark, Kylie, Makenna, Conner, and Fallyn Couste. He is also survived by his mother Clydene Allen, brothers Jim, Crosby, and Phil Allen, and sister Sally Allen. Woody was preceded in death by his biological parents Laura Allen and Woodrow Ratliff, father T.C. Allen, brother Richard Allen, sister Clarlene Peil, and son Sean Allen.

After a strong and brave fight against cancer for the last six years, during which he never lost his smile, Woody passed from this life in his home, surrounded by family and friends who loved him dearly. He was born in San Francisco, CA to... View Obituary & Service Information

The family of Dr. Woody James Allen created this Life Tributes page to make it easy to share your memories.

After a strong and brave fight against cancer for the last six...