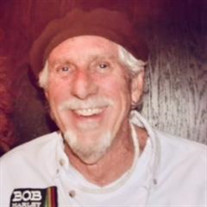 William “Bill, Binky, or Will Rose” Rosevear, Native Las Vegan, living in Silver City, Nevada, joined Heavens Band on Friday, Dec. 18, 2020. He went out on his shield, peacefully and gracefully, at home with Sheree, his wife of 28 years, and his dog. He was preceded by His parents Bill and Marion Dobrowsky Rosevear, as well as his grandparents, Eleanor and Alfred Tamblyn. He leaves behind his loving WV in-laws, Paul and Lyda Lister, and a large extended family as well as hundreds of friends. Will was adopted but he never cared because his mother told him she hand picked him. Marion was his biggest supporter and fan as well as a talented jazz pianist and piano teacher. Will was a consummate musician, a singer, songwriter, published playwright and actor. He leaves behind a treasure trove of music for the world to enjoy. Will raced cars & motorcycles, lived and ran around necked on a commune, loved rebuilding his older vehicles including several dune buggies and lately a vintage boat called Mr Lucky. He built Sheree shelves, closets, furniture, and then turned to coffee tables with games inside. He taught music and built a marvelous home and community for his bride. It is with deepest gratitude to the honesty and caring of Dr. David Johnson and Dr. Swaroop Pendyala that he was able to say goodbye and spread his love to so many souls. Silver City embraced him and made Will’s last weeks as full of love and light as humanly possible. They have continued to uphold Sheree. She credits their faith for his calmness and hers. Heroes medals to the Kindred Hospice nurse, Mary White, and the crew for the caring and concern they showed both of them. With honest and direct information, they were prepared. Will was not afraid or worried but ready for the next adventure. Thank you to Autumn Funeral Home for making a very stressful situation, easy as can be. In lieu of flowers, Sheree has requested any donations go to local homeless shelters, Food Banks or Veterans Homes in his honor. Feed a neighbor, help a musician with his bills, etc… A Second Line style celebration will be held in the spring.

William &#8220;Bill, Binky, or Will Rose&#8221; Rosevear, Native Las Vegan, living in Silver City, Nevada, joined Heavens Band on Friday, Dec. 18, 2020. He went out on his shield, peacefully and gracefully, at home with Sheree, his wife... View Obituary & Service Information

The family of William Earnest Rosevear created this Life Tributes page to make it easy to share your memories.