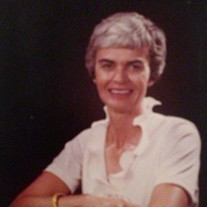 Wilburta (Willie) Shidler Marvel, who lived nearly her entire life in Northern Nevada, died Tuesday (April 23) at her daughter’s home in Carson City surrounded by her children and grandchildren. She was 87. Her husband John, prominent Battle Mountain rancher and longtime state Assemblyman, preceded her in death by 38 days. Mary Wilburta was born March 15, 1926 in Kansas City, KS. She was the fourth and youngest daughter of Dr. Wilbur K. and Mary Delanie (Hart) Shidler. At a very young age, the family moved to Phoenix and then to Minden – both for a short period of time - finally moving to Reno at the age of 2, where she spent her childhood. Wilburta and her family were longtime active members of the First Methodist Church in Reno. She attended Orvis Ring Elementary and Northside Junior High School. At Reno High School, she was involved in numerous activities graduating in 1944. She was an active member of the International Order of Rainbow for Girls, Reno Assembly #1. Wilburta was trained in ballet and tap dancing from an early age. As a young woman, she secured a bit part in a movie filmed in Reno starring Mickey Rooney. She also performed tap dancing in many productions for servicemen during World War II. After she enrolled at the University of Nevada, she worked for Dr. Wesley Hall Sr., a local physician. At the university, she met John, a fellow student who quickly nicknamed her “Willie.” They were married April 7, 1951 in Carson City and graduated together later that year. Willie earned a bachelor’s degree in education. She was a member of Tri-Delta sorority and was active in campus and church life. Willie moved with her husband to his hometown of Battle Mountain in the summer of 1951 and plunged into community activities while remaining focused on raising a family. Ultimately, she took a leading role in the Battle Mountain PTA, serving as room mother in all of her children’s classes. She helped choreograph musicals and Christmas plays including designing elaborate costumes for school and community events. Willie also created two of the Longhorns’ mascot uniforms, and offered strong support to high school athletic programs. In addition to all of her time in the classroom with her children, she was an elementary school substitute teacher, tap dancing instructor to many young girls, and Sunday school teacher at St. Andrew’s Episcopal Church in Battle Mountain. She recognized the need to serve the youth of the community and helped ensure they wouldn’t miss opportunities for enrichment. Toward that end, she started Battle Mountain Chapter 23, Order of Rainbow for Girls, in 1968 and served as its first mother advisor and mother advisor for many years even after her own daughters were grown. She was directly involved in the Nevada Rainbow activities throughout the state for more than two decades. Willie was active in the Nevada Cowbells, auxiliary to the Nevada Cattlemen’s Association, and supported her husband in his livestock activities some of which included in gathering and working cattle, branding, as well as cooking and making treats for the ranch crew. She served as her husband’s secretary in his ranching and public life, also assisting in his many campaigns for his State Assembly Seat. In 2010, the new Nevada Department of Agriculture Building in Sparks was dedicated and named for John and Willie for their contributions to the industry. She and John were constant companions and she often accompanied him to his Cattlemen’s Association and legislative meetings and hearings during his 50 years of public service. Willie and John were passionate about supporting and fundraising for the Shriners Children’s Hospitals and local Nevada organizations. In more recent years, they made Carson City their second home. In the mid-1980s, Willie was instrumental in helping the state acquire new silver and china for the Governor’s Mansion. This had been sadly neglected over the years and she and other involved Nevadans led a public awareness and fund-raising campaign to rectify the situation. Willie had many other creative interests, including gardening, modeling for community fashion shows, knitting, quilting, cross-stitching, and sewing – highlighted by her trademark label, “hand-made by Willie.” She believed her principal job was to establish a firm foundation for her family, and each of her three children, 10 grandchildren who lovingly called her “Nana”, and extended family were all her treasured gifts. Her passion for the importance of her family, faith and friends carried over to others throughout her life. She is survived by daughter Sharon (Tom) Andreasen; son John E. Marvel; daughter Michelle (David) Slagle; grandchildren Amber, Bobby (Rebecca) and Shari Andreasen; Amanda (Darin) Phelps, Dustin Marvel and their mother, Karen Urriola Marvel; and Christopher, Nicholas, Patrick, Jacqueline and Delanie Slagle; one great-grandson, Colt Andreasen; and a great-granddaughter (Phelps) due in the fall; as well as numerous nieces and nephews. In addition to her husband John, Willie was preceded in death by her parents, and sisters Dorothea Comer of Fort Bragg, CA, Maxine Anderson of Verdi, NV and Betty Marie Scovil of Sacramento, CA. Correspondence to the family may be sent in care of Autumn Funerals & Cremations, 1575 N. Lompa Lane, Carson City, NV 89701. The family wishes to thank Saint Mary’s Hospice for their spiritual and physical care provided and to Whispering Heights and Mountain Springs Assisted Living for assisting with her care.

Wilburta (Willie) Shidler Marvel, who lived nearly her entire life in Northern Nevada, died Tuesday (April 23) at her daughter&#8217;s home in Carson City surrounded by her children and grandchildren. She was 87. Her husband John, prominent... View Obituary & Service Information

The family of Wilburta (Willie) Shidler Marvel created this Life Tributes page to make it easy to share your memories.