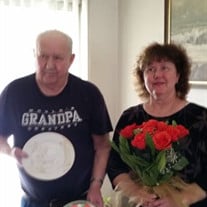 Wallace R. Rauch August 23, 1936 – May 14, 2018   Wallace Raymond Rauch was born August 23, 1936 in Woonsocket, South Dakota to Frank and Carrie Rauch.  He passed away peacefully at the age of 81, with his family by his side, after his medical issues overcame him. He married Gay Walker in April 1965 and together they had 3 beautiful children. He served in the US Navy for 4 years as a radar operator, flying between Hawaii and Alaska.  He and his family owned a farm in South Dakota which they sold in 1979, then moved to Coeur d’Alene, Idaho where they owned and operated a KOA campground.   After selling the campground, he worked as a custodian for the school district until his retirement in 2001.  They then moved to Carson City, Nevada to be near their children and grandchildren. He is survived by his wife, Gay, of 53 years, his daughter Sheri Bosco and her husband Richard Bosco of Dayton, NV, his son David Rauch of Bellingham, WA, granddaughters Tiffany and Jennifer Dalton of Dayton, NV, grandson Thomas Rauch and his wife Rylee and great granddaughter, Melody Rauch of Rathdrum, ID.  He is also survived by brothers John and Donald Rauch and sister Nancy Halijian and her husband Jim. He was preceded in death by his parents, his oldest son, Thomas Rauch in 1990, and his oldest brother in 2016. Wally was a wonderful, caring and thoughtful man who will be missed by his family and all who knew him. Services and inurnment will be Wednesday, May 30, 2018, 11:00 a.m. at the Fernley Veterans Cemetery, with full military honors.

The family of Wallace 'Wally' Raymond Rauch created this Life Tributes page to make it easy to share your memories.