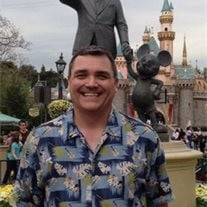 Life Legacy Thor Alan Zoellner September 28, 1967- August 22, 2017  After a courageous battle with cancer, the Lord took Thor home to be at peace on August 22nd. Thor was born in Anaheim, California on September 28, 1967 to Al Zoellner and Betty Larson Zoellner. He was the youngest of five children.  Thor loved helping people. He worked jobs at The Carson Nugget and Mervyn's. Thor valued excellent customer service. As the pharmaceutical buyer for Carson Tahoe Regional Medical Center, Thor worked hard to make sure that patient care was a top priority. He spent hours upon hours researching and finding the drugs needed for patients.  Thor was passionate about four things: faith, family, gardening, and Disney. He was a devoted husband, father, son, and brother. He spent many years working with the youth groups at Bethlehem Lutheran and Shepherd of the Sierra Lutheran churches. He acted upon his spiritual gift, which was to strengthen the faiths of the youth. His garden oasis was his refuge, which always relaxed his busy mind. However, Disneyland was his favorite place on earth. He understood and valued Walt Disney's idea for a place for the young at heart.  He was proceeded in death by his mother, Betty, and his brother, Rick. His wonderful family members still on this earth consists of his wife Anne, daughter Alexandra, sisters Candy Rolling(Steve) and Terri Blokzyl, brother Jim (Brandy), and father Al, as well as numerous cousins, nieces, and nephews.  A memorial service is scheduled at 10 a.m. on September 9, 2017 at Shepherd of the Sierra Lutheran Church. Please do not wear black or any mournful outfits. We are celebrating the joyful life Thor had, so happy outfit colors are preferred. If those joining us at the memorial have any Green Bay Packers, Anaheim Angels, Youth Gathering, or Disney shirts, those may be worn.

Life Legacy Thor Alan Zoellner September 28, 1967- August 22, 2017  After a courageous battle with cancer, the Lord took Thor home to be at peace on August 22nd. Thor was born in Anaheim, California on September 28, 1967 to Al Zoellner and... View Obituary & Service Information

The family of Thor Alan Zoellner created this Life Tributes page to make it easy to share your memories.