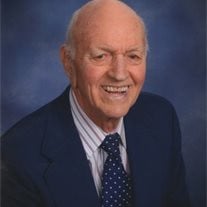 Thomas Clifford Carter was born in Draper, North Carolina on November 12, 1922 to Julia and Barney Jefferson Carter Sr. He went home to be with his Lord and Savior, Jesus Christ, on October 12, 2012 His loving parents preceded Tom in death, as did his daughter Dawn, his wife Joan, his siblings Mildred Carter, Franklin Carter, Margaret Stultz, Barney J. Carter Jr., Bonita Martin, James Henry Carter. Tom (or “Clip” as he was referred to growing up) enlisted in the US Navy in 1939. On December 6, 1941 the ship to which he was assigned, the USS Vega, arrived in Pearl Harbor, Hawaii. The following morning the crew of the USS Vega played a key role in limiting further damage from the attack by the Japanese on the United States. Following his service in the US Navy, Tom married Mylie Mighels (Herman) and they moved to Carson City in 1946. In 1949, Tom began working as an apprentice at the Nevada State Printing Office. In 1969, he was appointed to the position of State Printer. He later became Director of Printing with the Nevada Legislative Counsel Bureau until his retirement in 1979. Tom lived a long, healthy life that was filled with a love of the Lord, family, laughter, his church, golf, the SF Giants, and his career as a printer. He had a kind heart and was always willing to help someone in need. He is survived by his daughter Mist Carter of Elk Grove, CA, his sister Jac Hamrick of Eden North Carolina, his grandchildren Cory Gamble and Tawnya Root (Angelo), his precious great-granddaughter Hazen Root, his nephews Barney J. Carter III, Jim Hamrick (Wanda), Tim Hamrick (Marsha) Gil Carter (Tonya), Mike Carter (Mary) Gregg Carter (Wanda), Mark Carter, Kevin Carter (LaDonna) Scott Martin (Lori), his nieces Anne Marie Wilson, Judy Washburn, Lisa Hearl (Mark), Carolyn Cuthrbertson (Bill), Beth Carter, Julie Ford, and his loving companion Marolyn Adams.

Thomas Clifford Carter was born in Draper, North Carolina on November 12, 1922 to Julia and Barney Jefferson Carter Sr. He went home to be with his Lord and Savior, Jesus Christ, on October 12, 2012 His loving parents preceded Tom in death,... View Obituary & Service Information

The family of Thomas Clifford Carter created this Life Tributes page to make it easy to share your memories.

Thomas Clifford Carter was born in Draper, North Carolina on...