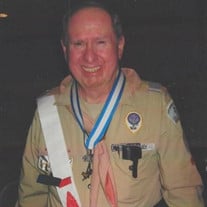 Theodore Doyle Hanks passed away on Tuesday, November 23, 2021 due to complications from COVID-19 in Carson City, Nevada. Theodore Doyle Hanks, the son of Theodore Verender Hanks and Vida Curtis, was born on December 18, 1937, in Blackfoot, Idaho. He was graduated from Idaho Falls High School in 1956. That summer he went to Chile on a three-week operation with the Civil Air Patrol. In the fall of 1957, he enrolled at Utah State Agricultural College. In 1958 he returned to South America where he served a two and ½ year mission in Argentina to preach the gospel for The Church of Jesus Christ of Latter-Day Saints. Upon his return, he met Rhonda Smith in a Geology class and lab for the first time on October 1, 1960. They went on their first date to a school dance on November 19, 1960. The romance continued and they were engaged on January 28, 1961 and were married in the Logan Utah temple of The Church of Jesus Christ of Latter-day Saints on June 9, 1961. In college he was enrolled in the ROTC program. On June 5, 1963, he was graduated from the Utah State Agricultural College school of Forestry with a BS in General Range Management and as a 2nd Lieutenant in the United States Army. He spent two years on active duty in the Armor Division at Fort Knox Kentucky where his assignment was to train the soldiers to serve in the Vietnam War. He was advanced to 1st Lieutenant and earned the Army Commendation Metal for outstanding leadership. Doyle enjoyed many years working as a Forester for the United States Forest Service and loved working in the outdoors. He began his career in Idaho for the Lowman Ranger District of the Boise National Forest. In 1967 he moved to the Cascade Ranger District of the Boise National Forest. In 1971 he began working for the Kamas Ranger District of the Wasatch National Forest in Kamas, Utah. In 1977 he transferred to the Carson Ranger District of the Toiyabe National Forest. In 1983 he transferred to the Supervisor’s Office in Reno, Nevada. On December 18, 1992, he retired from the United States Forest Service after 32 years of service. On December 21, 1992, he began his second career working for the Nevada National Guard in the Environmental Section and retired as the Environmental Program Manager on July 31, 2005. Throughout the years he served in many different callings in The Church of Jesus Christ of Latter-Day Saints including High Councilor, Bishop, and a member of a Stake Presidency in the Carson City Nevada Stake. He served his community as a volunteer EMT and about 30 years as a leader in the Boy Scouts of America. He was responsible for helping many boys achieve the rank of Eagle Scout, served as a District Chairman for the Nevada Area Council, and in 2008 was awarded the Silver Beaver Award. He shared his loved of the outdoors with his family. He taught them all how to ski so they could enjoy family time on the ski slopes of Utah. He spent many days over the years with his extended family camping in the mountains he loved so much. He is survived by his wife of 60 years, Rhonda of Carson City, Nevada, son Clifford Doyle Hanks (PJ) of Carnation, Washington, and Daughter Peggy Lee (Eeden) of Loomis, California. A son, Wayne Alan Hanks, preceded him in death in 2008. He has 8 grandchildren; Terryn Middlebrooks, Alan Ormonde, Timothy Vukasin, Owen Lee, Brian Hanks, Danielle Hanks, Patrick Hanks, and Cole Hanks. He has 6 Great grandchildren and many nieces and nephews. He also is survived by his sisters, Vida Weatherston (Ralph) and Maureen Steele, and his brother Lynn Hanks. The family wishes to thank family and friends who have offered support and shared memories of Doyle.

Theodore Doyle Hanks passed away on Tuesday, November 23, 2021 due to complications from COVID-19 in Carson City, Nevada. Theodore Doyle Hanks, the son of Theodore Verender Hanks and Vida Curtis, was born on December 18, 1937, in Blackfoot,... View Obituary & Service Information

The family of Theodore Doyle Hanks created this Life Tributes page to make it easy to share your memories.