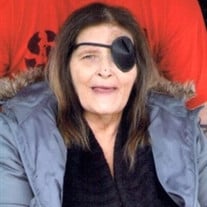 Stacey was born on May 5, 1949 to Frank and Julie Silvey in Washington DC. She then moved to Louisville Kentucky where she gave birth to her first son, Michael. After leaving Kentucky she moved to Cincinnati Ohio where she gave birth to a baby girl named Angela. She then moved to Los Angeles California where she met her life long companion William Stephens and they had a son named Chris. Stacey worked at a local magazine in Hollywood writing stories about local upcoming bands that played at the Whiskey and the Roxy. The Roxy was one of her favorite places to hang out with her friends. She was also a licensed cosmetologist and loved to make anyone look beautiful. Stacey loved to sing, she had the voice of angel and loved to record songs with her son Chris, that was one of her many passions. They lived in Los Angeles California until moving to Carson City Nevada in 1994. Stacey enjoyed spending time with her grandson Christian Cooper. He was the light of her world. Her son Chris Cooper, life long companion William and her daughter in law Cristal where her strength. Stacey enjoyed life and lived every day like it was her last. Her smile was what made the sun shine on a cloudy day. She gave all she had to her family and asked for nothing in return. Her hugs made you feel like everything was going to be alright, no matter what kind of day you where having. She is proceeded in death by her father, Frank Silvey, brother, John "Butch" Silvey, and life long companion William Thomas Stephens. She is forever loved and survived by her Son, Chris Cooper, grandson, Christian Cooper, granddaughter Alyssa Branigan, grandson Alec Branigan, granddaughter, Brittany Hall, daughter, Angela Land, son, Michael Hall and daughter in law, Cristal Cooper. Stacey also had many extended grandchildren, Kyle Hurst, Donald Hurst, Ryan Hurst, and Brianna Hurst. She had many extended family members and friends. She will be missed so much by so many people but she is now at peace and resting with the angels. "May your light shine upon us Stacey, may you sing with the angels, and may you guide us from heaven as you did on earth. We love you."

The family of Stacey Alice Cooper created this Life Tributes page to make it easy to share your memories.