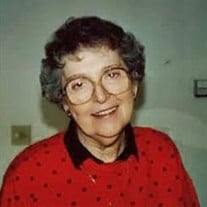 Shirley Joan (Sunblade) Morey July 7, 1928 ~ September 9, 2018 Shirley Morey passed away early Sunday morning, September 9th, at the age of 90. She was born in Bertrand, Nebraska, the fifth and youngest child of Robert and Lillie Sunblade. She grew up and attended school in Bertrand, played the clarinet in the band, sang in the choir, was a cheerleader, an honor student, and it was there that she met the love of her life. They graduated from high school together in 1946. Shirley Joan Sunblade married Rolland Joseph Morey on September 22, 1946. They were blessed with four children during the first ten years in Bertrand. They moved to Fair Oaks, California in 1957, to Ridgecrest, California, in 1966 and retired in Carson City, Nevada, in 1991. While loved ones may leave us, love stays with us forever. Shirley was a loving, proud, and devoted wife and mother. Shirley propagated love and compassion throughout her circle of family and friends. She was an amazing seamstress and homemaker. Passed down from multiple generations, her cooking skills were legendary. Holidays, birthdays, and gatherings with family and friends were her specialty. Shirley always made time for every member of her family and cherished her many long-time friends, including her neighborhood friends from Bertrand, Fair Oaks, Ridgecrest, Carson City and Gardnerville; and those from Immanuel Lutheran Church in Bertrand, Christ the King Lutheran in Orangevale, Grace Lutheran in Ridgecrest, where she sang and taught Sunday school, and St. Paul's Lutheran in Carson City where she participated in the quilting group and the LEE Group.She was a charter member of Daughters of Norway Queen Maud Lodge and enjoyed playing bridge. Shirley loved sports and attended multiple sporting events, especially those played by her children and grandchildren. She also enjoyed catching the University of Nebraska football games on Saturday TV with her husband. Shirley was preceded in death by Rolland Morey, her husband of 63 years and her sisters, Doris Abramson, Mildred Vaughn, and Elaine Abramson, and her brother, Wayne Sunblade. She is survived by her sister-in-law, Barbara Howat (Jim), her daughters, Vicki Hamilton (George) and Becky Clark (Michael), sons, Steven Morey (Angie) and Dan Morey, her grandchildren, Matt Hamilton, Liisa Hillenbrand (Brian), Tamra Opie (Jeff), Nicole Blinman (Chad), Shawna Hall (Ritchie), Michael Clark, Michael Loftain, Jenny Loftain (Ben Terry), Scott Morey, twenty one great grandchildren, two great-great grandchildren, and numerous nieces and nephews. The family wishes to thank the staff of Brookdale Gardnerville for their loving care of Shirley during her final years as well as the staff of Kindred Hospice. A Celebration of Shirley's Life will be held on Saturday, October 6th, at 11:00 am, at St. Paul's Lutheran Family, 1201 North Saliman Road, Carson City, NV. In lieu of flowers, donations in Shirley's memory may be made to St. Paul's "Shirley Morey Memorial Fund," 1201 North Saliman Road, Carson City, Nevada 89701 or to the Nevada Alzheimer's Association, 1301 Cordone Ave. #180, Reno, Nevada 89502.

The family of Shirley Joan Morey created this Life Tributes page to make it easy to share your memories.