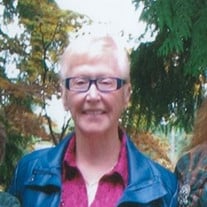 Sharon L. Hopkins Born January 8, 1944 Went home December 31, 2017 My mom, Sharon Hopkins, passed away in her sleep on December 31, 2017 in her recliner watching TV. Mom was born to Clark and Marion Justice on January 8, 1944 in Tacoma, Washington. She is survived by my brother Alex Hopkins, her brother Ron Justice, his wife Sue Justice, my aunt Dr. Gayle Justice, my sons Ross H. Hopkins and Nicholas Haefeli, and myself Samantha L Haefeli. She is preceded in death by her parents Clark and Marion Justice, her brother Dr. Sydney Justice, her father and mother in law’s Howard Hopkins, Louise Hopkins, and Dawn Hopkins. She had many friends in Tacoma, Graeagle, Truckee, Reno, Sparks, and Carson City areas that will miss her beyond words. Kathy Isaksen of Tacoma will especially miss her. She was the original “Jane of All Trades, Master of Most”. She was an avid horse rider and owner in her younger years, cared for more cats, dogs, turkeys, and even an emu named Peek-a-boo. She moved us to Reno, NV to start a career as a chef at what was known at the time as the MGM. Then moved Laurel and herself to Graeagle and instantly became not only involved in but as one Graeagle resident put it, “pillars of their community” with Relay for Life. This became a central focus every June for both of them from planning, to collection donations, and rallying the residents in that community to participate in finding a cure for cancer. Very special thanks to Laurel Ann Payne, her closest friend for the last 30 plus years; where, there was always some adventure she was getting Laurel Ann to go on, volunteer for, bake for, create for, or the other millions of other things they did together. A memorial service and reception will be held for my mom on January 20, 2018 at Autumn Funeral and Cremations, 1575 North Lompa Lane, Carson City, NV 89701 at 11am. Please send all flowers and cards to the funeral home. I have one last group to thank, all of my teammates at Saint Mary’s Hospice, thank you for all you are doing to get me through this.

The family of Sharon Lee Hopkins created this Life Tributes page to make it easy to share your memories.