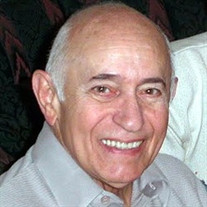 Russell Joseph LeBlanc, Sr., of Minden, NV, passed away on May 13, 2016, at the age of 89. Born in Brockton, Massachusetts on August 9, 1926, to Amos and Caroline LeBlanc, Russ was the fourth of five children. Russ had convinced his parents to allow him to enlist in the United States Navy when he was just 17 years, and he proudly served his country in both the Atlantic and Pacific theaters, participating in both the D-Day Invasion and the signing of the peace treaty after the surrender of Japan. In the years that followed, Russell tried his hand at several types of employment, but a career in sales is where he spent most of his working years. A first marriage that brought him two children ended after a short time. He was a sales representative for Stanley Home Products when he met future wife and life partner of 56 years, Shirley J. Burke, of Clifton Springs, NY, at a Stanley party. They married, had four children, and he remained working for the company, becoming a Branch Manager in Delaware and in Pennsylvania. Russell was never happier than when he had his family around him.. He loved to play jokes on people, was generous to a fault, loved animals, and enjoyed nothing more than spending time with his wife, children, sons- and daughter –in-law, and grandchildren. Russ and his wife, Shirley, moved to Minden in 1998 in order to be closer to their children and grandchildren, all of whom live in California. He has been involved with the Sertoma Club and for years was a part of the Comstock Chorus, singing the lead parts with the barbershop group all around the Carson Valley. He enjoyed participating in a regional competition in which they took first place, and took much pride in being part of the group. He also enjoyed working in his woodshop, making countless toys for his grandchildren, as well as putting together scale models of wooden ships. A Shitz-poo named Sugar was his constant companion for the last few years and Russ doted on the dog as lovingly as if she were his child, Russell is predeceased by his eldest daughter, Cathy Jean Hogrell, brothers Bertram and Joseph LeBlanc, and sisters Shirley Pajek and Phyllis Silva. Russ is survived by his wife, Shirley, of Minden, NV; son William LeBlanc, daughter Laurie and her husband Brett Rickaby; son Russell LeBlanc, Jr. and his wife Juei-Hsin Chin; daughter Tina and her husband Marco Jerkunica; daughter Sherri and her husband Peter McDevitt; fourteen grandchildren, several great-grandchildren, and many nieces and nephews.

Russell Joseph LeBlanc, Sr., of Minden, NV, passed away on May 13, 2016, at the age of 89. Born in Brockton, Massachusetts on August 9, 1926, to Amos and Caroline LeBlanc, Russ was the fourth of five children. Russ had convinced his parents... View Obituary & Service Information

The family of Russell Joseph LeBlanc created this Life Tributes page to make it easy to share your memories.

Russell Joseph LeBlanc, Sr., of Minden, NV, passed away on May...