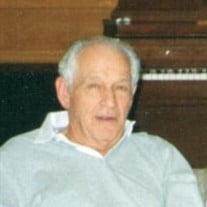 Rudolph (Rudy) Ceragioli Lieutenant Colonel USAR. Ret. March 11, 1925-May 23, 2013 Rudy Ceragioli 88, passed away peacefully at Carson Medical Center on May 23 , 2013 of a sudden illness. Rudy was born in Ogden, Utah to first generation Italian immigrant parents, Guido and Agnese Maria (Andreini) Ceragioli who came to America through the Ellis Island experience. Rudy’s parents married in Utah and moved the family to Sparks, Nevada in 1927. Rudy was the second son born to the Ceragioli’s. Eugene was his elder brother and Raymond is the younger brother. Rudy was raised in Sparks and graduated from Sparks High School in 1942. In June of 1943 Rudy enlisted in the United States Army. He served with the 605th FA 10th Mountain Division. Rudy’s service outside the U. S. included the European Theater with battles or campaigns in the North Apennines- Po Valley. During the final days of the war Rudy was at Lake Garda where on April 30, 1945, an amphibious vehicle (DUKW) went down with 24 American soldiers who drowned in the freezing glacier water of Adamello Mountain. Two days later the Nazis surrendered. Rudy was decorated with citations of the American Service Medal, European African Middle Eastern Service Medal ,World War II Victory Medal, Good Conduct Medal, Bronze Star Medal 134 Hq, 10th Mountain Division Mertorious Service Unit Plaque Go II Hq 7th Sv C 46, and the Legion of Merit. At the end of the war Rudy returned to Fort Logan Colorado where he separated from the U. S. Army in Feb. of 1946, and received an Honorable Discharge in Feb. of 1949. Rudy met Gloria M. Cox of Colorado Springs, Colorado. On March 6, 1947 they married and made their home in Sparks, Nevada. In December of 1947 Rudy partnered with his brother Eugene and friend Joe Frugoli and started the Custom-Bilt Venetian Blind Co. Business was good for the trio until July 23, of 1950 when a fire destroyed the business and nearly a quarter of a block of industrial property. After the loss of the business Rudy joined the Nevada National Guard, and moved his wife and sons Larry, and Gary to Carson City, Nevada. The Ceragioli’s were blessed with one more addition to their family, a son , Scott. Their marriage was one of 45 years and ended with Gloria’s passing on October 24,1993. Rudy received a certificate of retirement on March 11, 1985 from the Armed Forces Of The United States Of America for having served faithfully and honorably the The United States Army, and a retired reserve certificate in recognition of honorable service and continued interest in the defense of our nation. Rudy’s service to our country was 41years, 8 months, and 13 days. After retiring Rudy traveled, spent time helping in his brother Eugene’s construction business, and his son Gary’s cabinet shop. In the fall of 1994 Rudy gave up playing in the sawdust for sandwiches. He met Sherrye Taladay,who owned and operated the Deli Francesco in Carson City. They were a match. Rudy and Sherrye married June 28, 2003. They retired in August of 2009. The remainder of retirement was spent enjoying life and visiting family and friends. Rudy is survived by his wife Sherrye; three sons Larry (Mary) of Carson City, NV.; Gary(Jodi) of Woodfords, Ca.; and Scott of Oakley Ca.; Daughter in-law Kathy Ceragioli of Carson City, NV; Brother Raymond (Carol) Ceragioli of Palos, Verdes,Ca.; Step-sons David Cutting(Hilairi) of Alliance Ohio; Douglas Taladay of Carson City, NV; and James and Sharon Ellington brother and sister in-law of Paso Robles, Ca.; Nine grandchildren; 10 great- grandchildren; and many nieces, nephews and cousins. Preceding him in death were Agnese Ceragioli 1976; Guido Ceragioli 1980; parents, Gloria M. Ceragioli 1993;wife, and Eugene Ceragioli 2003; brother. Thanks be to St. Teresa’s, Carson Medical Center, Veterans Association, our doctors, Autumn Funerals and Cremations, family and friends. Rudy traveled all over the world on many roads, and the road he traveled most is expressed in a poem, by J. B. Downie Friendship’s Road Friendship is a chain of gold ; Shaped in God’s all perfect mold. Each link a smile , a laugh, a tear A grip of the hand, a word of cheer. As steadfast as the ages roll Binding closer soul to soul; No matter how far, or heavy the load- Sweet is the journey on Friendship’s road. We miss you deeply and you loving memory will live in our hearts always dear one.

The family of Rudolph (Rudy) Ceragioli Lt Col. USAR. Ret. created this Life Tributes page to make it easy to share your memories.