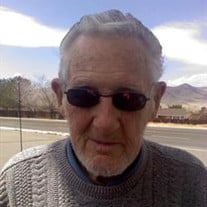 Roy Stanton Knight passed away on Monday, January 14, 2013, 12 days past his 85th birthday. He would have told you that he was, “born at a very young age” and would most likely mention the dinosaurs that were wandering about. His real birthday occurred in Sacramento, California at his parents’ home on January 2, 1928 (what he so fondly called, “Hangover Day”) to his now deceased parents, William Daniel Knight (Nova Scotia Canada) and Alice Elizabeth Slocum (Minnesota, USA). After excelling in many sports he graduated from Sacramento Senior High. In February of 1946, Roy enlisted with the United States Army where he worked as an Airborne Private First Class. When he finished his tour with the Army, he graduated college and then reenlisted in the United States Air Force where he did tours all over, making many friends and seeing the world. He retired from Moffat Field AFB in Sunnyvale, California in 1975. While a Master Sergeant in the United States Air Force, He met and later married his wife, Betsy Jo Allison Knight, on October 15, 1965. They raised their two daughters, Teri Lee Knight Schmidlin and Patricia Lynn Knight in Kyburz and later in San Jose California. Both in California and Nevada, he was an active Mason, partaking in many events to support his daughters and granddaughters in the International Order of Rainbow for Girls, most recently for Carson Assembly #7. Roy served in the Army of Occupation in Japan, Korea, and Vietnam. He has received the Good Conduct and Meritorius Service Awards, Army Occupation Medal, World War II Victory Medal, National Defense Service Medal, Outstanding Unit Award and the Army Parachute Badge. He was also a Sharpshooter with US Carbine and M-1 30 Caliber rifles. There were probably more, but he never bragged (except about his fish stories). He was a published poet and if he were alive to tell you, his favorite hobbies were resting, sleeping and telling… (insert expletive here) but we’ll just call them tall tells. Roy is survived by: his wife, Betsy Knight; his daughters Teri Knight Schmidlin and Pati Knight: his step children Robert New and Karen Sinclair; his grandchildren, Lyndsey New, Danae Gunter, Jonathan Knight, Ashley Sinclair, Christopher Sinclair, Matthew New, Dakota Knight, and Carly Schmidlin; his 8 great grandchildren; his cousin, Jerry Slocum; his nieces, Rita and Richie Knight as well as numerous other relatives. He was greatly loved and will be deeply missed by his many, many, many family of friends.

Roy Stanton Knight passed away on Monday, January 14, 2013, 12 days past his 85th birthday. He would have told you that he was, &#8220;born at a very young age&#8221; and would most likely mention the dinosaurs that were wandering about. His... View Obituary & Service Information

The family of Roy Stanton Knight created this Life Tributes page to make it easy to share your memories.