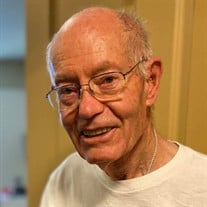 Rolf “Orin” Gilbertson, age 82, of Carson City, Nevada, passed away on July 18, 2021 at home surrounded by loved ones while in the care of Kindred Hospice following a stroke and then a devastating fall. Orin, as he was known, was born on July 21, 1938 to Rolf Edward Gilbertson and Mildred (Bjornstad) Gilbertson in Tehachapi, California. Orin grew up in Salem, Oregon and graduated from North Salem High School. He then went to Linfield College in McMinnville, Oregon and studied Physics, Mathematics and Professional Education. While at collage, he loved pulling pranks. And he was not alone in doing it. Orin was surprised when he opened his diploma to find the list that the dean had made record of. While at college, he met the love of his life, Clare Johnson. They married 2 months after graduation and moved to China Lake, California to start their new life together at the Naval Weapons Center, was part of the Junior Professional program. Orin, retired after 35 years of working for the Department of Defense on many projects for the Naval Weapons Center. During his career he won several awards including The Michelson Laboratory Award recognizes individuals for technical excellence based on outstanding performance of their individual duties. He also authored or co-authored many publications After retirement, the Gilbertson’s moved to Desert Hot Springs, California to be closer to Clare’s parents. While there, during the summers they traveled extensively to escape the heat of the desert. As members of WIT (Winnebago Itasca Travelers) Tours, they led 30 tours around the U.S., Alaska and Canada. Meeting new friends was a high light from each trip. He was an avid amateur ham radio operator (WW6O) and taught many classes and shared his love of DXing. Both Orin and Clare (N6ODO) are operators, so in the world of ham radio’s they are known as an extra couple having extra class licenses. WW6O is now a “Silent Key”. He will truly be missed. Orin was preceded in death by his parents and his brother Eugene Gilbertson. He leaves behind his brother Gary (Judy) Gilbertson of Woodinville, Washington, his wife Clare of 61 years of marriage, two daughters, Tina Ediss (Greg) of Carson City, Nevada, and Dana Sandy (Robert) of Minden, Nevada. Five grandchildren and one great grandchild.

Rolf &#8220;Orin&#8221; Gilbertson, age 82, of Carson City, Nevada, passed away on July 18, 2021 at home surrounded by loved ones while in the care of Kindred Hospice following a stroke and then a devastating fall. Orin, as he was known, was... View Obituary & Service Information

The family of Rolf "Orin" Gilbertson created this Life Tributes page to make it easy to share your memories.