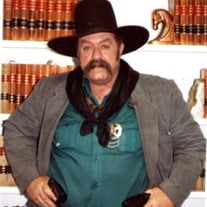 My Last Ride The time has come for one last ride, I'm heaven bound to be by God's side. I loved my country, I loved my wife, I loved my family, I loved my life. But in my death please shed no tears, I'm heading for glory, with God I'll be near. Your sorrow and sadness, please put aside, I've saddled my horse for one last ride. ********************************************* ROBERT NOBLE STUTSMAN “BEARCLAWS” Robert (Bob) Noble Stutsman “Bear Claws” passed away at age 72 on July 15 surrounded by his loving family. Bear was born on January 15, 1941 in Alton, Illinois. He was married twice; first to Dorothy Stutsman and then Sharon (Cowen) Stutsman. He is survived by Sharon, his wife of 45 years, his three sons (Matt Stutsman of Carson City, Dale Lamborn of Carson City and Chris Henkins of Phoenix, Arizona), one daughter (Laurie “Boogie” VonRekowski of Clear Lake California), 10 grandchildren (Sean, Branden, Travis, Bearett, Adam, Jared, Christa, Brian, Blake, and Alexandrea “Baby”) and 3 great grandchildren (Landen , Aden and Tatum). He also has three awesome daughter-in-laws, Peggy Stutsman, Leah Lamborn, and Stephanie Henkins and one son-in-law, Alex VonRekowski. Bear has been a well-known character in Carson City and the surrounding counties for the past four decades. Numerous newspaper and magazine articles have been written about him. Bear was someone who stood out in a crowd. He was 6’ 6” tall and weighed 330 pounds, dressed in black pants, a wide-brimmed black hat and a black vest with a silver and gold badge on his chest. In his hands, a grapefruit looked as small as a baseball. Two .44-caliber Magnum pistols were cross-gripped, at his belt line. He had the fierce, drooping mustache of a mountain man and wore a necklace of 20 bear claws. The story behind his nickname and necklace began at the age of 15. Working as a forester, he ventured into Arizona’s Sycamore Canyon to chop a felled tree into firewood. He walked around the point of a cliff and met a black bear. Both he and the bear were startled. The bear weighing 455 pounds was only a few feet away. When the bear lunged, he swung the axe at the animal’s head. Bear Claws killed him with what he called “one lucky blow.” Bear’s mother who was half Cherokee made him the necklace. She told him, “When you kill an animal in battle, you take the spirit of the beast.” Bear said, “I guess it is true since I grew to be as big as a bear.” Bear made a living at being big and tough since he was an overgrown kid in Arizona. He chopped trees and packed horses for the Forest Service, served in the military, owned a truck tractor repair business, worked in law enforcement and security jobs, was a bush guide and trapper in Alaska and boxed in 22 professional heavyweight prize fights. But above all, his passion was “cowboying” and being a lawman. He was raised on a ranch near Tombstone, Arizona, where he learned the cowboy way of life. At one point he captured and broke mustangs for a living. He continued to work with horses and wagons on the week-ends for much of his life. He even had some Texas long-horn cattle as pets. Bear began a bailiff career in the Carson City Justice Court in the 1980s for the popular Judge Tom Davis, who gave him the custom-made badge he wore. He was first used as a “hired gun” to keep courtroom peace” after a series of Carson City prison riots. He became a permanent part of the courthouse in 1987 as a bailiff. In his first year as bailiff he confiscated approximately 600 weapons, knives and otherwise, that people tried to bring into the courthouse. That number dropped by about 95 percent during his tenure. His imposing image served him well in his mission to keep the peace in Carson City’s courtrooms. Bear spoke quietly about “respect” and “the law” in a tone that left no doubt he believed in what he said. He had to control death-row inmates who had nothing to lose. In 1994, he made national headlines when, under the presiding Judge’s order used duct tape to seal a rowdy prisoner’s mouth. Bear grew up on the legends of Tombstone gunslingers and lawmen like Johnny Ringo, Wyatt Earp and Doc Holiday. Bear loved to read about Indian issues, western lore, wagon trains and stories about General George Armstrong Custer. He said, “The old West was a tougher, cleaner time in history. Things were new and honor counted for something.” He got caught up in western history at a very early age and said “If I had my choice, I would be 100 years dead by now.”

My Last Ride The time has come for one last ride, I'm heaven bound to be by God's side. I loved my country, I loved my wife, I loved my family, I loved my life. But in my death please shed no tears, I'm heading for glory, with God I'll... View Obituary & Service Information

The family of Robert Noble Stutsman created this Life Tributes page to make it easy to share your memories.

The time has come for one last ride,