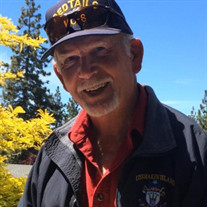 Robert (Bob) Hudson, a devoted husband, father, grandfather, son, brother and friend to all whose lives he touched, passed away in his Lake Tahoe home on Monday, March 30, 2020. He was 87 years old. He is predeceased by his father Melvin Hudson, mother Evelyn Janice Edwards, stepmother Grace Viola Harmon, and sister Janice Lee Horner. He is survived by sisters MaryAnn Bishop and Glenda Kennedy. He was the beloved husband of 40 years to Jo Anne; she survives, as do their daughters, Cheryl Anne and Lesley Anne. He is survived by his former spouse, Mary Louise Friel (married 1955), mother of Yolaine Kathryn, Melinda Ann (Joseph), and Robert Wallace, Jr., father of granddaughter Isabella Rose. Born and raised in Indianapolis, Indiana, Bob graduated Shortridge High School in 1950 then attended college and worked for the Indianapolis Times Newspaper as an artist until enlisting in the U.S. Navy in 1951. After enduring an unforgettably-frigid basic training experience at Great Lakes Naval Training Center, Michigan, he began his 22 year career in Naval Aviation, working his way from jet and reciprocating mechanic ultimately to airplane Crew Chief and the rank of Chief Petty Officer. A proud member of the ‘Brown Shoe’ Navy, Bob had the unique naval career experience of never having been assigned to a ship. His first duty station in Key West, Florida was ‘heaven on earth’ to him after his training in Michigan. From there he served and lived in Morocco (Port Lyautey), Italy (Naples), the Philippines (Cavite), Panama (Canal Zone), Spain (Rota), Puerto Rico (Roosevelt Roads), Florida (Pensacola), and San Diego (North Island). Bob was highly respected by his crewmates for his aircraft knowledge and the example he set for hard work no matter how difficult the conditions. Crewmembers remember that they looked up to him because of his fair treatment of others, calm demeanor and confidence, which helped them all stay focused on their tasks, particularly in emergency conditions such as lost engine power during flights. While in the Navy, his passion for private flight began; he became a certified ground, VFR, instrument, and glider instructor. He taught ground school and flight training for over 40 years, usually in addition to his other work endeavors. He started teaching in Puerto Rico, achieved Gold Seal status (high safety rating as an instructor), and finished as Chief Pilot for Golden State Aviation in El Cajon, CA. After completion of his naval career, Bob went to work as a liaison engineer for Rohr Industries in Chula Vista, CA, conducting scale model tests for innovative new ship designs for the Navy. He completed his work career with Pacific Southwest Airlines and US Air as a Production Supervisor before concentrating on flight instruction in his retirement. Bob treasured his children; his favorite free-time activities included taking them on memory-making automobile and RV road trips, which involved skiing, camping, or riding ATV’s in the desert. He loved international travel and exposed his family to international trips and excursions when possible. With his love of all things mechanical and his nature as an instructor, his family had ample opportunities to learn about the working parts of cars and motorcycles. Though quiet and soft spoken, he would contribute to conversations only after giving others a chance for their inputs. Seldom stern, his most endearing communication tool was his “tell,” a twinkle in his eye combined with a twitch of his lip. An official Celebration of Life for Bob will be planned when restrictions due to the COVID -19 are lifted.

Robert (Bob) Hudson, a devoted husband, father, grandfather, son, brother and friend to all whose lives he touched, passed away in his Lake Tahoe home on Monday, March 30, 2020. He was 87 years old. He is predeceased by his father Melvin Hudson,... View Obituary & Service Information

The family of Robert Wallace Hudson created this Life Tributes page to make it easy to share your memories.