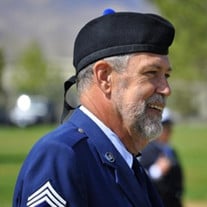 Rick James was born May 15, 1952 to Wilma and Richard James and raised with his younger brother Ron James. He married the love of his life Paula. They were blessed to be husband and wife for 35 years. He graduated with a Bachelors of Arts in Theatre from the University of Nevada, Reno. He worked for the State of Nevada as a computer programmer and retired a couple years ago becoming busier than ever. Rick had many passions as he was a true renaissance man. Rick was a member, along with his dad and his brother, of the Sierra Highlanders Pipe Band. He played bagpipes for competitions, funerals, friends, and family. He was an honorary member of the Nevada Air National Guard playing the trumpet or the bagpipes. He also played for the Washoe Sherriff’s Office. His musical talent did not stop with playing the bagpipes, he also played guitar, bass, trumpet, and even dabbled in playing the drums, keyboard and any other instrument he got his hands on. However, it was songwriting that would wake him up in the middle of the night with inspiration, and in the morning his wife would hear him strumming the guitar singing a new song to the Lord. He used his bass playing talent most recently to play in the worship band at Connected Church of the Nazarene and had also been their worship band leader for a number of years. Music was not his only talent. When his children were young, he used his carpentry skills to build them a playground, his daughter a playhouse, and his son a pirate themed tree house. As his children grew, he transformed his backyard into a tropical oasis. He built a deck around the pool, and a tiki hut bar. His hobbies included building and launching model rockets, model train layouts, and volunteering at the train museum. He also enjoyed the sciences but especially astronomy and astrobiology in real life and as Sci-Fi (live long and prosper). He was able to see his children Jeremiah James and Jennifer Digangi grow into adults. He was most delighted to have the honor to become a grandpa 3 years ago enjoying a little girl who adored her grandpa, loved to dance to the music he played, even “jam” with him, and ran quickly to him for anything she needed fixed. Rick James was taken from us abruptly and much too soon on August 17, 2012. We are comforted in our assurance that he is delighted to be playing for the Lord in Heaven. He was a friend to many, a doting son, an amazing dad, a wonderful husband, a hard worker, an intelligent witty conversationalist, and a man of God. He is leaving a hole in our hearts that can never be filled, but a legacy that will inspire many.

Rick James was born May 15, 1952 to Wilma and Richard James and raised with his younger brother Ron James. He married the love of his life Paula. They were blessed to be husband and wife for 35 years. He graduated with a Bachelors of Arts... View Obituary & Service Information

The family of Richard 'Rick' William James created this Life Tributes page to make it easy to share your memories.