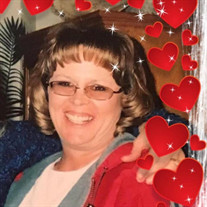 Rhonda Lynne Pendegraft ( Steward) Native Carson City resident Rhonda Lynne Pendegraft, died peacefully while surrounded by family on November 4th, 2021, after a courageous fight against prolonged illness. Rhonda was born on June 9th, 1959, at Carson Tahoe Hospital, Carson City, NV. to Clarence & Jean Steward (Bell) A 1977 Carson High graduate, she chose to stay close to home. She dabbled in a few career fields; her love for animals drew her to working with them as a caretaker & groomer. Dealt Blackjack at the CC Nugget ( if you were smart, you did not sit at her table!) Opportunity arrived to work at Carson Tahoe Hospital and eventually retired from the State of Nevada, Division of Parole & Probation. Rhonda & her daughter Melissa, were blessed with the gift of love, when she met and married Michael V. Pendegraft, on June 14th, 1985. You would often hear her say he was her “best friend, her soul mate, her rock” “Between the earth and the sky above nothing can match a grandmother's love”. She adored being “Grammie”. She was admired for her unique sense of humor. The streak of stubbornness, (which runs in t he family) was known to many, but she could always turn that around, and captivate your heart. Her passions were many, which included, travelling, camping & simply enjoying time with friends & family. The 49er faithful, and SF Giants fans had a home with the Pendegrafts, and of course everyone else! She was preceded in death by her father, Clarence Steward, mother Jean Bell, and sister Sandy Farris. Survived by her husband, Michael, daughter Melissa, two sons through marriage, Les & (Hillari), Derek & ( Ana) & their grandchildren, Avery, Mason, Olivia, & Elias. Her sister(s)Cindy G reeson & (Mark) , Lauri Bell. Brothers Glen & Barbara Doke, Rick & Sherry Doke, Mike & Rhelda Doke, several nieces & nephews, and multiple extended family members. “ A heart is not judged by how much you love, but by how much you are loved by others”. Internment arrangements are private at this time. A celebration of life will be held at a later date.

The family of Rhonda Lynne Pendergraft created this Life Tributes page to make it easy to share your memories.