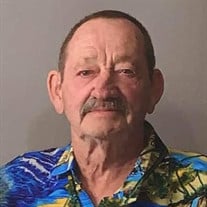 Raymond Snedeker, known as “Popop” to all of his 35 grand and great grandchildren, passed away on Sunday, June 12th 2022 at his home in Dayton, NV surrounded by family and love. Raymond was born on May 19th, 1940 to Harry and Josephine Snedeker, the 6th of 8 siblings. His father passed when he was just 3 years old. He joined the army in 1958 and spent some time in Germany. One of his favorite stories was of the time he had coffee with Elvis in Germany while in the army. In 1961, after his time in the military ended, he met Marion Kellis, who would become the love of his life. They would be married in November of 1963 and remain married 57 years, the entirety of Raymond’s life. Raymond and Marion have 5 children, four boys (Kelli, Anthony, Mathew and Jason) and one daughter (Regina). They bought a house in Palmdale, CA in 1972 , where they would live, love and raise their family for 47 years before moving to Dayton, Nevada. During his time in Palmdale, Raymond worked at Lockheed for an astounding 37 years, retiring on June 30th, 2005. After retirement, Raymond and Marion spent their time traveling both nationally and internationally, frequently travelling across the country to visit their children and many grandchildren. Whenever family gathered, Raymond could be found clowning around with the children. It is often said his eyes would light up whenever his grandchildren came into the room. He would lovingly and jokingly call his grandchildren silly names, make silly noises and funny faces, doing anything to make them smile. He loved woodworking and painting and “talking shop”. The SR-71 was his “baby” as he spent so much of his time working on it while working for Lockheed. He was very proud of his work. Raymond had a work ethic like no other, and this was only exceeded by his love for and dedication to his family. Raymond was preceded in death by his father Harry, his mother Josephine, his brothers Harry, Richard, and Wiley and his sisters Leona and Mary. He is survived by his wife Marion, his sisters Josephine and Rosie, his sons Kelli, Anthony and wife Pamela, Matthew, Jason and wife Kristen and his daughter Regina as well as his 35 grandchildren. He will forever live in the hearts of the many, many friends and family who loved him.

Raymond Snedeker, known as &#8220;Popop&#8221; to all of his 35 grand and great grandchildren, passed away on Sunday, June 12th 2022 at his home in Dayton, NV surrounded by family and love. Raymond was born on May 19th, 1940 to Harry and Josephine... View Obituary & Service Information

The family of Raymond Edwin Snedeker created this Life Tributes page to make it easy to share your memories.

Raymond Snedeker, known as “Popop” to all of his 35 grand and...