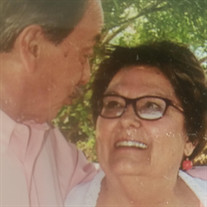 Patricia Louise (Irwin) Smith Dec 10, 1944 - Feb 17, 2019 Patricia Irwin Smith passed away peacefully in her sleep on February 17, 2019 in Carson City, NV at the age of 74. She was born December 10, 1944 in Hanford, CA to Venoid and Audrey (Stone) Tolbert. She lived with her parents and her brother Eugene and sister Sandra in Lemoore, CA and then in Laton, CA until 1962. After graduating from Laton High School in 1962 she married Frank Irwin and they had two children, a son Steven and daughter Tamara. The family lived in several cities throughout California over the years, but in 1982 she and Frank divorced and Pat moved to Carson City, NV. She and Frank remained friends throughout the years. After moving to Nevada, Pat went to work for the State of Nevada Department of Motor Vehicles and retired after 25 years of service. She also did work for several years with Nevada DETR on a part-time basis. But the true love of her life was always her children and grandchildren. She was fond of telling anyone who asked her what she did that "she was a mother and grandmother" and she always found time to be involved in as many of their activities as possible. Even after her son and his wife moved to Texas Pat would always plan trips to go visit them. She also had a love for bowling and bowled in leagues for many years. She made many, many friends through this endeavor that have remained to this day. In the last few years of her life Pat married her current husband Ron Smith in March, 2016 after a two year courtship. They were very involved in the Kiwanis Club of Carson City and the First Christian Church of Carson City. Pat was faithfully by Ron's side as the Lt. Governor's wife of the Kiwanis Division and she quickly became the darling of the organization. Her wonderful smile was always a beacon of warmth and joy to all.Ron and Pat took a belated honeymoon to Hawaii late in 2016 and had a wonderful time. She also became part of Ron's family and got to know his two sons, Ryan and Grant, their wives Susan and Shana, and his 3 grandchildren and made 3 trips back to Tennessee over Christmases. Wherever she went or whoever she met, she made a lasting impression of kindness, grace, humility and love. Pat was truly loved and admired by everyone. She is survived by her husband Ron; son Steven Glenn (Charlotte) Irwin; daughter Tamara Lynn (Jerry) Pruzzo; granddaughter Katelyn Waller, granddaughter Morgan Pruzzo and grandson Will Pruzzo; brother Eugene (Edith) Tolbert; sister Sandra McHone; granddaughter Tina (Mike) Hudgins and great-grandchildren Morgan and Brendon; grandson Brian (Laura) Irwin and great-grandchildren Aiden, Jordan and Alice; granddaughter Krystal (Jesse) Fuller and great-grandchildren Trenton and Preston; stepson Ryan (Susan) Smith; stepson Grant (Shana) Smith and step grandchildren Krystina, Christopher and Clay. Psalm 23:6 was one of her favorite passages of Scripture: "Surely goodness and mercy shall follow me all the days of my life and I will dwell in the House of the Lord forever". May you rest in peace Patricia; you were loved and will never be forgotten. A viewing will be held at Autumn Funeral Home in Carson City on Thursday, Feb 28 from 4-8 pm and a Celebration of Life will be at First Christian Church on Friday, Mar 1 at 10:30 am

The family of Patricia Louise Smith created this Life Tributes page to make it easy to share your memories.