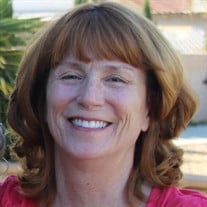 Patricia Ellen Quattro (October 30, 1957- May 21, 2020) Patricia Ellen was born on October 30, 1957 in Shreveport, Louisiana, to Hellen Wilson and Philip Youra, and was raised over the course of 48 states and several foreign countries, in a loving military family. Patti finished high school in Southern California and pursued the first of several college degrees by receiving a BS in nursing at Chapman University. Patti loved being a nurse, as one of her talents was helping those in need—which she did consistently throughout the course of both her career and her life. Patti loved a great adventure, and spent every chance she had with her large network of family and friends. She was always planning her next fabulous trip. In the early 1980s, Patti left nursing to pursue a career in research at ICN Pharmaceuticals, where she met her husband Mike, and it was during those years they had their only child, a daughter named Christine. During the early years of their marriage, Patti left ICN to focus on raising Christine and supporting Mike’s career in healthcare, which had the family moving frequently between the East and West Coast and traveling the world over in between. Patti returned to the nursing field in the late 90’s and earned her MS from Sac State, and later a PhD from Nova Southeastern. She was a Clinical Instructor in Pediatrics, Mental Health and OB Maternal/ Child and she worked throughout 15 separate medical centers in Sacramento, Contra Costa, Solano and Napa Counties. Patti was gregarious and welcoming, and also an intensely private person. We have been so blessed to have those who knew her best share fond memories of her. It’s a process that has brought tears and laughter, along with the wish that we had more time. Patti believed in living life on your own terms and getting the most out of every day—which she did in her life, even in the smallest of moments, every single day. When she took either of the family dogs for walks her favorite places to go were up in Rockville Park, or down by the water at Arneson Park. She and Mike would slow dance in the living room with the lights dimmed and Macy Gray’s “I try” blasting over surround sound. Every single time she went fishing, she managed to out fish Mike without even trying— in Springhill, her lure stuck in the reeds—thrashing around until she landed a 8.5 lbs bass, when Mike’s only came in at 2. At Christine’s graduation from grad school— she stood on a lawn in Westchester in the blistering sun and said how proud she was. We could obviously list these moments endlessly, because everything in our lives reminds us of how she was everything to us. She is survived by her husband Mike, and daughter Christine; father Phil and step-mother Gaynel; siblings Stephen Youra, Hellen Anne; siblings-in-law Mark Howe, Linda Quattro; aunts and uncles, Jim Wilson, Vicki and Dave Rucker, Terri Cardwell, Mary Falso; cousins, Leeanne and Dan Pacatte, Dave and Gail Wilson, Tracy Adams, Lauren and Mike Millard, Jennifer Whaley, Bryan Cardwell, Katie and Jerry Metcalf, Grant and Nancy Walker; nieces and nephews, Sean Youra, Brandon Youra, Mackenzie Howe, Aaron Washington, Clay Pacatte and Kerri O’Brien, Tim and Angela Pacatte, Jessica Wilson, Madison Millard, Ross Millard; very special extended family and loved ones, Jim and Rebecca Smith; godchildren James and Sydney Smith; dear friend Scott Schoeffel, and so many more relatives. Patti was preceded in death by her mother, Hellen Wilson Youra; aunt, Diane Wilson; uncle, Scott Cardwell; grandmother, Vurdice Philips; and cousin, Joe Falso. With current events such as they are, we will be holding a memorial when all of our dear Patti’s family and friends can gather safely to throw a shin dig she would be proud of. In lieu of flowers, donations can be made in Patricia’s name to the UCSF Benioff Children’s Hospital of Oakland. We will leave you with a quote from her favorite book: “Do not let your fire go out, spark by irreplaceable spark in the hopeless swamps of the not-quite, the not-yet, and the not-at-all. Do not let the hero in your soul perish in lonely frustration for the life you deserved and never have been able to reach. The world you desire CAN be won. It exists…it is real…it is possible...it’s yours.” – from Atlas Shrugged, by Ayn Rand

Patricia Ellen Quattro (October 30, 1957- May 21, 2020) Patricia Ellen was born on October 30, 1957 in Shreveport, Louisiana, to Hellen Wilson and Philip Youra, and was raised over the course of 48 states and several foreign countries, in... View Obituary & Service Information

The family of Patricia Ellen Quattro created this Life Tributes page to make it easy to share your memories.