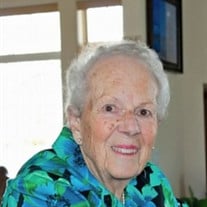 Norma May Snyder, of Gardnerville, Nevada, passed away peacefully at her home surrounded by family on December 27, 2011. She was born in Denver, Colorado, on May 15, 1922 to Jules and Philomena (Jacobs) Moquin of Quebec, Canada. Norma was the youngest of seven children. She moved to Nevada in 1993 from Lakeview, Oregon, where she and her late husband owned Snyder’s Motel. Norma’s first love was children, and she dedicated most of her life to taking care of them. Norma enjoyed baking, sewing, crocheting and knitting. Over the years, loved ones, friends, and many families in need benefited from countless homemade baby sweaters, hats, and blankets. She was preceded in death by her husband Carl Snyder. She is survived by a sister, Ruth Cogan of Santa Barbara, California; two daughters, Peggy (Albert) Wehe of Kingwood, Texas, and Paula Carter-Cooper (Frank) Cooper of Bend, Oregon; three grandchildren, Chris (Michelle Moore) Wehe of Houston, Texas, Sandi Wehe of Cardiff, California and Karen (Bud) Rinasz of Gardnerville, Nevada; three great granddaughters, Briana Manning of Gardnerville, Nevada and Caitlin Wehe of Houston, Texas and Nicole Rinasz of Gardnerville, Nevada; two nieces, Adrienne Nastari and Michele Seal and one nephew, David Cogan; and loving family dog, Roxy. After moving to Gardnerville five years ago, some of her favorite times were the huge gatherings at Karen and Bud’s home. One of her favorite times was the 2010 wedding of Karen & Bud at Caples Lake Resort, where she had the opportunity to visit all of her family and their friends in one place. Bud nicknamed her “Granny” and on the occasion of her 87th birthday celebration, Bud announced to everyone that “Granny” was turning 90! She never let him live it down and they laughed about it many times. A milestone for Norma was attending Briana’s graduation from high school in 2011, marking an 18 year journey with her first great granddaughter.

Norma May Snyder, of Gardnerville, Nevada, passed away peacefully at her home surrounded by family on December 27, 2011. She was born in Denver, Colorado, on May 15, 1922 to Jules and Philomena (Jacobs) Moquin of Quebec, Canada. Norma was the... View Obituary & Service Information

The family of Norma May Snyder created this Life Tributes page to make it easy to share your memories.

Norma May Snyder, of Gardnerville, Nevada, passed away peacefully...