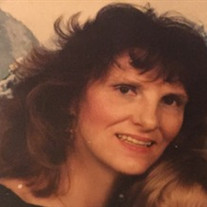 Norma Jean Johnsen 12/30/1953 – 3/02/2017   Norma Jean Johnsen of Carson City, NV passed away peacefully on March 2, 2017. She was born in Challis, ID December 30, 1953 to the late Wilbert A. Johnsen and Leona A. Knowles. She grew up and went to school in Wallace and later moved to Salmon, ID, Montana, California and Nevada. She held numerous jobs from housekeeping to dry cleaning. She was very active with Toys for Tots for many years. She moved to the Carson City area in 2006. Norma is preceded in death by her father Wilbert of Clancy, MT and her mother Leora of Carson City, NV. She is survived by her daughter Rhonda Bridges of Marysville, CA, seven grandchildren, her sister Peggy of Sparks, NV, her brother Chester of ID, sister Alice of South Lake Tahoe, CA, adopted sister Tanya of Carson City, NV, and numerous nieces, nephews and cousins. A memorial service will be held on Saturday, March 25, 2017, beginning with the dedication at the Dayton Cemetery at 10:30 A.M., then going to the Church of Jesus Christ of Latter Day Saints 1331 McKay Drive, Carson City, NV 89703.

The family of Norma Jean Johnsen created this Life Tributes page to make it easy to share your memories.