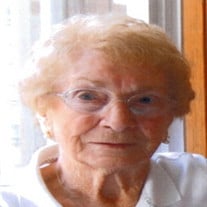 Norma Borcich Goldsam passed away peacefully on July 4, 2010 at her home in Carson City, Nevada. She was born on December 18, 1923 in Fort Bragg California to Marica and Marion Borcich. The family moved to San Francisco in 1925 where Norma attended Presentation grade school and graduated from Galileo High School in 1942. Following graduation she worked for the Standard Oil Company in San Francisco until she married her husband, Hector Canessa, on April 28, 1948. They opened Canessa Mechantile Company where she was the secretary-bookkeeper for over 12 years. Following her husband’s death in 1960, Norma moved to Fort Bragg to be closer to her family. She married Ralph “Bud” Goldsam, a widower with two young children, on July 12, 1962. Norma worked as an instructional assistant and librarian at Redwood Elementary School for 25 years. After retirement, she became a member of the Mendocino Coast Hospital Auxiliary and volunteered at the hospital for over 10 years. After her move to Carson City, Norma became involved at St. Teresa of Avila Catholic School. She worked in the library and loved to read to the students every week. They affectionately referred to her as “Miss Norma.” Norma loved the outdoors and enjoyed walking the beaches around Fort Bragg, hiking in the woods, gardening and fishing on their commercial salmon boat the “Jeannette.” She also enjoyed her crossword puzzles, reading, and vacationing at the Russian River with her family. Norma was preceded in death by her husband, Bud, in 2005, her parents, her sister, Joan DeMartini, and brother, Marion Borcich, Jr. She is survived by her daughter and son-in-law Christine and Fred Perdomo, step-son Roger Goldsam of Eureka, California, and step-daughter, Rhonda Azevedo, of Santa Rosa, California, her beloved grandchildren, Rick and Katie Perdomo, Tyler and Emily Goldsam, Holly Azevedo Tash and Kim Azevedo Saunders, nephews and wives Vern (Yvette) DeMartini, Paul (Laura) DeMartini, niece and husband Joanne (Manuel) Mattos, two grand nieces a grand nephew, and three great-grand children. A Memorial Mass will be held on August 6, at 11:00 AM at St. Teresa of Avila Catholic Community, 3000 N. Lompa Ln. A private interment will be held at Rose Memorial Park in Fort Bragg at a later date. In lieu of flowers, donations may be made to St. Teresa of Avila Catholic School Library or Scholarship Fund, or to St. Mary’s Hospice. Autumn Funerals & Cremations are entrusted with the arrangements.

Norma Borcich Goldsam passed away peacefully on July 4, 2010 at her home in Carson City, Nevada. She was born on December 18, 1923 in Fort Bragg California to Marica and Marion Borcich. The family moved to San Francisco in 1925 where Norma... View Obituary & Service Information

The family of Norma Borcich GOLDSAM created this Life Tributes page to make it easy to share your memories.