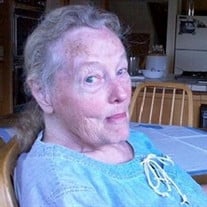 Myrna E. Valdez died of complications following surgery in Carson City on February 20, 2014. She was 75 years old. Myrna is survived by her husband, one son, two daughters, two step-daughters, and 14 grandchildren. Myrna was born in Denver, Colorado to Alice and Milton S. Johnson. She grew up in Englewood, Colorado and graduated from Englewood High School in 1956. She attended Colorado College in Colorado Springs, where she majored in English and was active in the Mountaineering Club. She moved to the California Bay Area in 1958, where she worked for Stanford University in various departments, retiring as the Administrator of the Stanford Linear Accelerator in 1993. She was known for being kind and efficient, and good with people, and for making much-appreciated birthday cakes for her co-workers. Myrna loved the beauty of wild places and outdoor activities like hiking, camping, backpacking, and skiing. She ignited this same passion in her family and friends, and in many young women as Girl Scout troop leader. Upon retiring, Myrna moved to Swauger Creek, near Bridgeport, California, in the southeastern Sierra Nevada Mountains where she and her husband of 49 years, Ramon V. Valdez, built their dream home. She spent nearly twenty years there enjoying visits with friends and family, and cooking and caring for everyone whose life touched hers. She cultivated wildflowers around the house, and grew gladiolus, begonias, tomatoes, geraniums, and many other flowering plants in her greenhouse. To My Mother You’re a mother who had a mother, so maybe you know, but before you go I must tell you how much I love you Like a tiny drop in the ocean buoyant, surrounded by unended belonging How this feels, is how much I love you. -written by a daughter in July 2013

Myrna E. Valdez died of complications following surgery in Carson City on February 20, 2014. She was 75 years old. Myrna is survived by her husband, one son, two daughters, two step-daughters, and 14 grandchildren. Myrna was born in Denver,... View Obituary & Service Information

The family of Myrna E Valdez created this Life Tributes page to make it easy to share your memories.