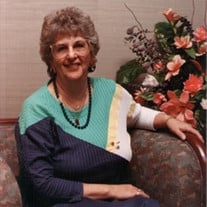 Mary Lou Noel passed away peacefully Thursday, July 18, 2013 In Carson City, her home of over 50 years. A lifelong Nevadan, Mary Lou was born in Ely, Nevada April 18, 1925 To Dr. Ontie and Lillie Hovenden. She was raised in McGill Nevada in the shadow of the Ruby Mountains, and after finishing High School; she attended and graduated from University of Nevada-Reno in 1945. In June, 1950 she married the love of her life, Jake Noel, in St. Peters Episcopal Church in Carson City. They lived and worked briefly in Denver and Chicago then moved to Carson City in the mid-1950’s, where Mary Lou lived for the rest of her life. Mary Lou worked for the Nevada Dept. of Education for a time before the birth of her two daughters, Linda and Debra. Mary Lou was a major contributor to P.E.O., Philanthropic Educational Organization, whose goal is to further education for women. She was instrumental in forming P.E.O. Chapter AA in Carson and and went on to the State board and served in all offices at the State level and finished as President. She then went to the International level and served on the International Peace Scholarship Committee. Mary Lou was a lifelong Episcopalian and a member of St. Peter’s Parish in Carson City. She was an independent woman, a world traveler, a philanthropist, a devoted wife and mother, a sister, daughter, aunt and most of all a great friend to many. When one dealt with Mary Lou, what you saw was what you got. She was honest and straight forward in her dealings with everyone, and one always knew where they stood. She was pre deceased by her parents, Ontie and Lillie, her brother Tom and two nephews, Tom Jr. and John. She is survived by her daughters Linda and Debra of Carson City, nephew Steve Hovenden, great nephew Jake and great nieces Sienna and Rebecca, all of Fairbanks, Alaska; nieces and their husbands Robin Margeson of North Carolina and Martha Law of Napa, California, great niece Robin Hart and her family of Incline village Nevada and many other great nieces and nephews. Services will be held Tuesday, July 30, 2013 at 2:00 pm at St. Peters Episcopal Church in Carson City. In lieu of flowers, Mary Lou requested any donations to be made to The International Peace Scholarship, P.E.O. Executive office, 3700 Grand Ave, Des Moines, Iowa, 50312. Arrangements are in the care of Autumn Funerals & Cremations, to view the on line memorial and sign the register book please visit www.autumnfuneral.com

Mary Lou Noel passed away peacefully Thursday, July 18, 2013 In Carson City, her home of over 50 years. A lifelong Nevadan, Mary Lou was born in Ely, Nevada April 18, 1925 To Dr. Ontie and Lillie Hovenden. She was raised in McGill Nevada in... View Obituary & Service Information

The family of Mary Lou Noel created this Life Tributes page to make it easy to share your memories.