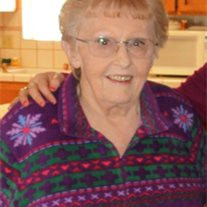 MARY LOUISE KOEHLER August 27, 1931 – January 22, 2017 Mary Louise Koehler, 85, passed away on January 22, 2017, at Carson-Tahoe Hospital in Carson City, NV. Mary was born on August 27, 1931, in Madison, Wisconsin, to John and Margaret Moore. She moved with her family to Los Angeles, CA, when she was a child. After high school, she met Leonard Koehler, L.A. County firefighter and WWII marine veteran. They married in 1954 and raised four children. She was a homemaker, part-time retail clerk, and PTA member. After their children were grown and Leonard retired, they moved to Incline Village, NV, in 1984, and later to Minden, NV, in 1999. Her favorite activities included square dancing, needlepoint, gardening, and ceramics. She was an avid San Francisco Giants fan. Late in life, she discovered the iPad, and enjoyed hours on it playing games and keeping up on news about her beloved Giants. Both Mary and Leonard loved animals, adopting many cats and dogs over the years, and supporting animal causes. She was especially fond of cats. Mary was preceded in death by: her parents, John and Margaret Moore; her husband, Leonard James (“Jim”) Koehler; and her son, Thomas Koehler. She is survived by: her son John Koehler; her son James Koehler; her daughter, Patricia Weinbach (Koehler); her granddaughter, Ariela Koehler; her grandson, Darek Koehler; and her two feline companions, “Maury” and “Norman.”

The family of Mary Louise Koehler created this Life Tributes page to make it easy to share your memories.