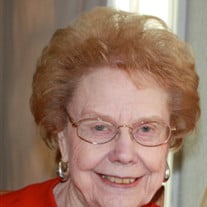 Mary Frances Lathrop died peacefully in her sleep February 14th, at age 92. Mary was born July 28th, 1921 in Ogden, Utah to James and Edna Sarver, both originally of Indiana. Mary grew up in Ogden, Utah, then in 1938 moved to Scarsdale, New York where she graduated from High school. In 1941 she graduated from Centenary College and went to work as a secretary for several banks in New York City. When WWII started, she worked for Magnaflux Corporation, which made X-Ray equipment for inspecting welds for the war effort. In 1943 she married her high school sweetheart Robert Lathrop, who at the time was in training as a navigator/bombardier in the Army Air Corps. They lived briefly in Los Angeles until Robert was re-assigned to the Pacific Theater for the duration of the war, flying in B-25 bombers. Mary returned to New York to live with her parents until the war ended. After the war, Mary and Bob moved to Berkeley, Ca. until Bob graduated from the University of California with a Civil Engineering degree. In later years, the family lived in San Carlos, San Rafael, Bakersfield and Moraga, California. After completing Robert’s career with the Southern Pacific Railroad Company, they retired to Las Vegas, NV. Mary moved to Gardnerville in 2008, and has lived with her daughter Barbara and son-in-law Mitchell Elmore since 2011. Mary is survived by her three children: James Lathrop (Marti) of Sacramento, Ca; John Lathrop (Carol) of Washington, WV; and Barbara Elmore (Mitchell) of Minden; Grandchildren: Cynthia Barkhau (Gary), of Raleigh, NC; Robert Lathrop (Rosemary) of Forest Hill, MD; Andrea Wallace (Landon) of Las Vegas, and Courtney Elmore of Cockburn Town, San Salvador, Bahamas; Great Grandchildren John Lathrop of Rochester, NY; Ethan and Zackary Wallace of Las Vegas, and Julianna Lathrop of Forest Hill, Md. Mary was an accomplished pianist, having studied from childhood through college, and played for numerous school and church performances. She enjoyed travel, and in her life had visited all the continents except Antarctica. She loved dancing, gourmet dining, gardening, and most of all spending time with her family, especially her grandchildren and great grandchildren.

Mary Frances Lathrop died peacefully in her sleep February 14th, at age 92. Mary was born July 28th, 1921 in Ogden, Utah to James and Edna Sarver, both originally of Indiana. Mary grew up in Ogden, Utah, then in 1938 moved to Scarsdale,... View Obituary & Service Information

The family of Mary Frances Lathrop created this Life Tributes page to make it easy to share your memories.