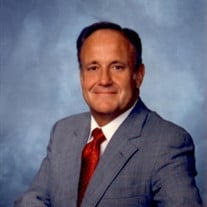 Marvin Randall Parrish September 29, 1936 – December 30, 2012 Marvin Randall Parrish passed away December 30, 2012 in Carson City, NV where he and his wife, Alice, have resided since 2006. Marvin was born in Kemmerer, Wyoming, September 29, 1936 to Gail and Marie Parrish. He fought a long and courageous fight with Alzheimer’s disease. The family rejoices because Marvin has joined his Lord and Personal Savior, Jesus Christ, for eternity in heaven. But the parting also brings sorrow to the family who has lost a beloved husband, father, father-in-law and grandpa. Marvin unselfishly served and encouraged others his entire life and remained an inspiration and example to many on how to live a joyous, full and productive life. His motto was, “Get your work done, do it the best you can and don’t complain.” Marvin taught his family in life and in death. Marvin lived with his family in LaBarge, Wyoming from 1936 – 1945 then moved to Thermopolis, Wyoming where he attended elementary and high school. He was active in numerous school activities, was an altar boy at the Episcopal Church and worked part time jobs. In 1956 he attended The University of Wyoming majoring in Mathematics and Statistics. In 1957 he married Donna Marie Woodhead, and they had four children. After college he moved his family to Casper, Wyoming and began a laundry business in the Sunrise Shopping Center. While running the laundry he began working with the Bon Agency, which established his long and successful career in insurance and bonding. Eventually Marvin opened The Parrish Agency, operating it for 30 years. Throughout his career in Casper, Marvin received numerous awards and recognitions due to his generous support of the community, in many areas. Marvin was an avid outdoorsman. He enjoyed fly fishing, hunting, camping, and hiking and focused on getting a Grand Slam in the 80’s. He enjoyed all these activities with his children and grandchildren. He spent many hours teaching the grandchildren to fish. In 1991 Marvin married Alice Nielsen Ryan. They moved to Dubois in 1992, residing there for 14 years. Together they were owners and broker of Coldwell Banker Realty. In 1996 Marvin was awarded the top broker recognition with Coldwell Banker for the State of Wyoming. Later they sold Coldwell Banker and partnered with Sotheby’s in Jackson Hole, Wyoming. Marvin and Alice bought a winter home in Nevada in 1994 where they eventually retired. Marvin was a dedicated member of the Hilltop Community Church in Carson City, NV, Surviving are: his wife, Alice, of 21 years, daughter BeLinda (Peter Bellows)of Greenville, SC; son Joe Parrish (Carrie) of Casper, WY; daughter Cindy Parrish (Bruce Lamberson) of Casper, WY; daughter Kelly (Marco Spagnuolo) of Flagstaff, AZ; two step daughters Vickie (Shane Buechler) of Sparks, NV and Michelle (Bernardo Sandoval) of Elko, NV; seven grandchildren, Cody Bellows Andrews, Kiah Bellows, Grady and Fletcher Parrish, Ella, Anna and Renzo Spagnuolo; and six step grandchildren, Samantha, Cassidy and Jett Buechler and Tori, Sophia and Priscilla Sandoval. Marvin was preceded in death by his parents; his brother, Norman Parrish; and his sister Gail Darlene Breitenbach.

The family of Marvin Randall Parrish created this Life Tributes page to make it easy to share your memories.