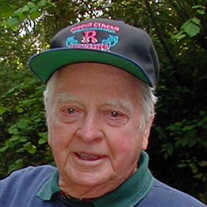 Marvin F. Wood of Gardnerville, Nevada passed away Tuesday, May 3rd at the age of 92, from complications related to being the age of 92. Born in 1918 in Ankeny, Iowa - Marv was the middle of three. In passing, Marv joins his brothers, Ken and Wayne. Marv was married for 71 years and is survived by his wife Freda , son Michael , grandchildren Jason, Krista, and Crystal, and great-grandchildren Ana, Austin, Sofia, Brooklyn, and Brayden. Marv worked as a caddy in his youth, establishing a lifelong love of Golf. Marv and Freda met during the Great Depression, when they both worked in Des Moines, Iowa at a laundry service, Marv was a deliveryman and Freda worked in the office. Married in 1940, Marv joined the Army after Pearl Harbor, and spent time overseas in WWII as a military policeman in North Africa, Europe and also at sea in the Mediterranean and Atlantic. After the war, Marv started a pinball and jukebox business in Iowa for a few years and also operated a gas station. Marvin joined the Masonic lodge in Newton Iowa, and was a member for 56 years. The family moved to southern California in the 1960 and operated a marina at the Salton Sea, before moving north to San Jose. Marv worked as a commercial real estate broker. In 1980, Marv and Freda moved to South Lake Tahoe and became owners and operators of the Ski Run Liquor and Grocery stores. They retired and moved to Gardnerville in 1991. Marv played golf well into his 70's and was proud to have played the Old Course at St. Andrews in Scotland. In their retirement, Marv and Freda enjoyed travelling and visited relatives across the United States as well as countries in Europe. They also travelled to Canada, Mexico, Australia, New Zealand, Singapore and China. To those of us who knew him, we will miss him, yet we are proud and grateful to follow his example of hard work and tenacity. He tempered a legendary stubbornness with generosity, loyalty, and dedication toward his family and friends.

Marvin F. Wood of Gardnerville, Nevada passed away Tuesday, May 3rd at the age of 92, from complications related to being the age of 92. Born in 1918 in Ankeny, Iowa - Marv was the middle of three. In passing, Marv joins his brothers, Ken... View Obituary & Service Information

The family of Marvin Fay WOOD created this Life Tributes page to make it easy to share your memories.

Marvin F. Wood of Gardnerville, Nevada passed away Tuesday, May...