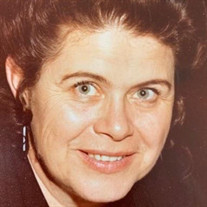 Marilyn Blatter Crawford died peacefully and quietly at her home on August 6, 2021. She was 93 and had lived in Carson City since 1951. Marilyn was born on February 28, 1928 in Idaho Falls, Idaho, the daughter of Henry Reed Blatter and Valeria Pearson Blatter. She grew up in the small farming community of Ammon, Idaho where her father was a wheat farmer on the family farm started by Reed’s grandfather, John Rudolph Blatter, after the Civil War. Although she was a child during the Great Depression and a teenager during WWII, she felt that she was born and raised during the country’s best times. She graduated from Bonneville County High School in 1946 with the same 23 other children she had started school with in 1st grade. She attended college at Utah State University in Logan, Utah where she met and married her husband of 38 years, Earl Crawford. They were married in 1948. Earl worked in Carson City for the U.S.. Bureau of Reclamation and died in 1986. Marilyn continued living in Carson City for the next 35 years until her death. She loved Carson City and thought it was the best place in the country to live and raise a family. Marilyn was an active and devoted member of the Church of Jesus Christ of Latter-Day Saints and served in many capacities during her 70 years in Carson City, including serving as a Cub Scout Den Mother in her late 70’s. She loved working with those little boys and would let them entertain themselves climbing the big apple tree in her backyard. She was a wonderful cook (authored a cookbook of her favorite homestyle recipes) and loved playing bridge with friends and doing crossword puzzles. She traveled extensively with friends and family and especially enjoyed her trip to Germany and into Switzerland where the Blatter family had emigrated from. Marilyn is survived by: three children: Cathleen Snider (Salem, OR), Vaughn (Denise) Crawford (Mesa, AZ) and Stephen Crawford (Silver City, NV). She is also survived by her two sisters – Cheryl Graham and Vicki Harward and her brother John Blatter. One daughter (Colleen) and three of her brothers – Glenn, Lynn and Kay Blatter – predeceased her. She has 9 grandchildren (Jaime, John, Kimberly, AAron, Niki, Tyler, Jason, Michael and Saralynn) and 24 great grandchildren. Services will be held on Friday, August 13th. at 10:00 at the LDS Stake Center in Carson City, 411 North Saliman Road. Marilyn will be buried next to her husband, Earl, at the Lone Mountain Cemetery in Carson City.

Marilyn Blatter Crawford died peacefully and quietly at her home on August 6, 2021. She was 93 and had lived in Carson City since 1951. Marilyn was born on February 28, 1928 in Idaho Falls, Idaho, the daughter of Henry Reed Blatter and Valeria... View Obituary & Service Information

The family of Marilyn Elinor Crawford created this Life Tributes page to make it easy to share your memories.

Marilyn Blatter Crawford died peacefully and quietly at her home...