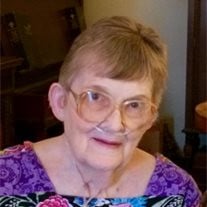 Life Legacy Margaret “Maggie” Ann Sharpe, age 79, passed away on Friday, December 2, 2016 during a hospital stay. She was born to Everett and Margaret Hamilton on August 29, 1937 in Porterville, CA. Margaret lived and attended school in Strathmore, CA. She graduated from high school in 1955. During her life she also lived in Auberry,North Fork, and Madera, CA. In 1978, Margaret moved to Carson City, NV and eventually, made her home in Dayton, NV. She was a homemaker, drove a mail route over treacherous mountain roads, volunteered in the school library where her daughters attended school, and spent several years as a Madera County Sheriff's Department dispatcher. Her interests and hobbies were playing the piano, painting, paper mache, embroidery, enjoying musicals, and reading. She had a soft spot for animals and especially loved cats. For years, until her health declined, she attended the Calgary Baptist Church in Dayton and was the pianist for their services. Margaret was predeceased by her parents, Everett and Margaret Hamilton and her sister, Linda Noel,and her husband, Heinz Sharpe. She is survived by: daughter and son-in-law, Cindy and Steve Greer; daughter and son-in-law, Karen Allred and Vic Turjanis; step-daughter and son-in-law, Sylvia and Harold Whitt; brother and sister-in-law, Everett “Bud” and Jean Hamilton. She is also survived by four grandchildren: Jesse Greer (Jessica), Sherylyn Beard (Jason); Steven Allred (Kaycee); Jennifer Link (Steven) and seven great grandchildren and nieces and nephews. The family will celebrate her life at a memorial service to be held on Saturday, December 31, 2016 at the Calgary Baptist Church, Dayton, NV. The time of the service has yet to be determined

The family of Margaret 'Maggie' Ann Sharpe created this Life Tributes page to make it easy to share your memories.