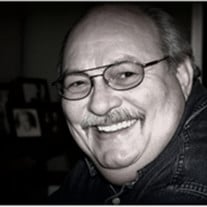 Lynn Kinder passed away on January 22, 2013 at the age of 56. Lynn was the oldest son of Ron and Julianne Kinder's 5 children and was born at Sacred Heart Hospital in Havre, Montana on March 13, 1956. When he was born the doctor said he had... View Obituary & Service Information

The family of Lynn LeRoy Kinder created this Life Tributes page to make it easy to share your memories.