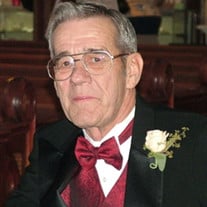 Dayton--Lyle Jerome Johnson, more affectionately known as “Jake,” 75, died Monday, September 20 following complications from surgery at the Carson-Tahoe Hospital. He leaves his wife of 48 years, Algina Johnson; his two daughters Christine and Julie (husband Gabriel), his two sons Russell (wife Deborah) and William, four brothers Maurice, Sidney, and Dale (wife Clarabeth) and Charles (wife Betty), and 5 grandchildren James, Cody, Jack, Maya and Michael. He is preceded in death by his father William Tecumseh Johnson and mother Louise Johnson. Mr. Johnson was born in New Underwood, South Dakota and raised on a farm. He graduated from high school and at 18, joined the United States Marine Corps and served for three years as a Radio Repairman for the 8th Tank Battalion. Upon his honorable discharge he attended the South Dakota School of Mines and Technology, and graduated with a B.S. Degree in Electrical Engineering in June, 1962. After graduating, Mr. Johnson met his wife, Algina, in Great Falls, Montana where he was working on the Minute Man project for RCA Service Company. They were married in December, 1962. They moved to Fairbanks, Alaska and experienced both The Great Alaska Earthquake of 1964 and the devastating Fairbanks Flood in 1967. Eventually, they settled in Maryland where they raised their four children. Mr. Johnson retired from RCA Service Company (now part of Lockheed Martin) in 1994, and moved to Dayton, NV. He worked for H&R Block for several years during his “retirement.” He was a tax preparer and also taught many advanced tax classes. He was a long-time friend of Bill W. and truly lived his life one day at a time; he constantly reminded his children to do the same. He will be sorely missed by many family members and friends. Services to be held at St. Ann’s in Dayton, NV on Friday, September 24, 2010 at 10:00 a.m. Graveside service to be held at the VA cemetery in Fernley, NV on October 1, 2010.

The family of Lyle Jerome JOHNSON created this Life Tributes page to make it easy to share your memories.