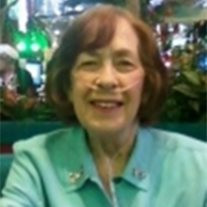 Linda “Lynn” Elizabeth Diaz, age 83, passed away on Friday, February 26, 2016 in Carson City, Nevada. She was born to Annabelle Lee Appling December 20, 1932 in Fresno, CA. She was wed to Robert L. Diaz July 20, 1961 in Carson City. Linda attended Sacred Heart School in Hollister, CA and graduated from Notre Dame High School in Watsonville in 1950. She lived in Fresno, Hollister, Watsonville, San Jose, and Campbell. She sang in the church choir with her aunt and had a beautiful voice. After graduating Linda worked in Watsonville as a bank clerk, with the newspaper as a proofreader and teletype operator (faster and more accurate than anyone) and after her children grew older as a retail consultant at Charlie Rose Baseball in Campbell. During her children’s school years she was active in the PTA and coached several girls’ fast-pitch softball teams. She retired with her husband in Carson City in 1991. She love her family most of all and was always her husband’s and children’s biggest and most devoted fan. She enjoyed music, dancing, musicals, old westerns, racing movies, action movies, and horses, cats, and dogs. She enjoyed feeding the birds (and squirrels) and one wandering cat at her home overlooking the city and the Sierra Nevada mountains. Linda is predeceased by her husband of 49 years Robert L. Diaz. She is survived by three sons and daughters-in-law and one daughter, Larry and Anne Niebling of Carson City, Rob and Margaret Niebling of Tenino, WA, Leanne Diaz of Carson City, and John and Tobie Diaz of Carson City. She also leaves behind five grandchildren Jennifer Langstaff, Jacqueline Niebling, Laura Diaz, Jonathan Diaz and his wife Gabriella, and Harley Niebling. She has five great-grandchildren Nick and Paul Langstaff, Kennadi Rose Jones, and Damien and Jaxsin Diaz. Also surviving are her aunt Joy Porteur of Carson City, her sister-in-law Rosalie Diaz of San Jose, CA, and many dear cousins.

The family of Linda Elizabeth Diaz created this Life Tributes page to make it easy to share your memories.