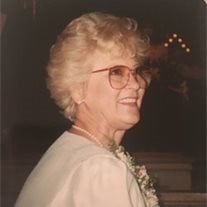 Lillian Paul August 23, 1935 – January 8, 2018 Lillian Paul of Carson City, Nevada, passed away peacefully with family at her side on January 8, 2018. Lillian was born in Hamtramck, Michigan, on August 23, 1935. She worked at Bell Telephone Company before marrying Lester Paul almost 60 years ago, on November 8, 1958, in Hamtramck, Michigan. They went to California on their honeymoon and ended up staying in the San Francisco Bay Area for 37 years. They lived in Discovery Bay for 20 of those 37 years, where they raised a family and built a successful tile and contractor business, West Coast Tile. Lillian and Lester moved to Carson City, Nevada, in 1995, where they operated Paul Tile Company. After her retirement, Lillian enjoyed working part time in the Carson City casinos to stay active and meet new friends. Lillian was a devoted wife, loving mother, and proud grandmother who would do anything to help a friend in need. She loved collecting recipes and cooking amazing meals, and she always had an extra plate for anyone who came to visit. She was an avid baseball fan and a San Francisco 49er football faithful. Lillian was preceded in death by her parents John and Eleanor Halasa, her son Lester Paul Jr., and her sister Irene (late Albert) Jurkiewicz. Lillian is survived by her husband Lester Paul of Carson City, Nevada; daughter Lisa (Mark) Mason of Brentwood, California; grandson Edward Mason of San Francisco, California; sister Jenny (late Jerry) Shemke of Warren, Michigan; sister Delphine (Edward) Ramsay of Rochester, Michigan; sister Christine (late Robert) Szymanski of Lexington, Michigan; and many nieces and nephews. A celebration of life will take place in March at St Anne’s Catholic Church in Byron, California.

The family of Lillian Paul created this Life Tributes page to make it easy to share your memories.