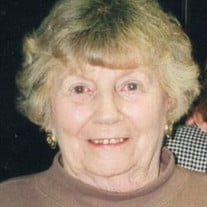 The family of Kathryn Taschereau wishes to make known her sudden, yet peaceful passing on August 3, at Carson-Tahoe Hospital. Kathryn was the eldest of six children born to Willis and Helen Gillard in Spruce, Michigan. On January 7, 1945, she married Roland (Joe) Taschereau in Detroit, Michigan. They moved their family to California in 1957, settling in Simi Valley where they served on the Little League board and belonged to various bowling leagues and card clubs. Desiring a more rural lifestyle, they moved to Thousand Oaks where Kathryn lovingly tended to her flower and vegetable gardens, dogs, chickens, ducks and a sheep named Elvira. While traveling through Nevada on a family vacation, Kathryn and Roland fell in love with the Carson Valley and made the move to Gardnerville in 1973. Kathryn worked for Bently Nevada Corp. until her retirement. Family always came first with Kathryn; most weekends were devoted to large family gatherings that included rousing games of Pinochle. Over the years, Kathryn enjoyed gardening, playing various card and board games, watching golf and San Francisco Giants baseball, cooking, especially baking, and was well- known for her delectable Christmas cookies. Kathryn was predeceased by her husband Roland in 1978, two sisters Marie Beaufrome and Jean Parise, and her beloved Australian Shepard Abbie. She will be greatly missed by her sons Robin (Jane) Taschereau, of Thousand Oaks, CA., Reginald (Yoko) Taschereau, of Ocala, FL., daughters Cheryl Eshenaur and Renee (Rob) Spencer of Dayton, NV., 12 grandchildren and 17 great-grandchildren. Her sister Joyce McClain of Hendersonville NC, brothers Burt Gillard of Simi Valley, CA., Peter Gillard of Columbus, MI. and brother-in-law Joe Parise of Alpena, MI and numerous nieces and nephews. The family wishes to thank the staff of Skyline Estates in Carson City where Kathryn has lived the past few years, especially those who could appreciate her sharp wit and everyone who was courageous enough to challenge her at Scrabble.

The family of Kathryn Taschereau wishes to make known her sudden, yet peaceful passing on August 3, at Carson-Tahoe Hospital. Kathryn was the eldest of six children born to Willis and Helen Gillard in Spruce, Michigan. On January 7, 1945,... View Obituary & Service Information

The family of Kathryn Marie Taschereau created this Life Tributes page to make it easy to share your memories.

The family of Kathryn Taschereau wishes to make known her sudden,...