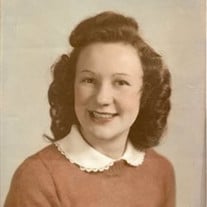 Biography Kathryn Jean Anderberg Johnson. 90, passed away peacefully at Skyline Estates, Carson City, on November 5, 2015. Kathryn was born on St. Patrick’s Day of 1925, the only child of Don Carlos and Kathryn Reedy Anderberg, in Glenns Ferry, Idaho. She spent her childhood there, excelling in school and sports. Basketball was her game at Glenns Ferry High, her team state champions and undefeated during her 4 year career. She went on to play basketball at University of Idaho, Moscow. While attending, she met her husband and life partner, Herman Maurice “Maurie” Johnson. Kathryn traveled across the country to marry him at Ft Benning, Georgia in August 1944. Their strong and happy marriage lasted 64 years, until he passed away in 2006. While Maurie pursued a federal civil service career, Jean worked as a secretary and administrative assistant, at first for several churches, then finishing her career as administrative assistant for school district department heads in Yakima, WA. She was a natural leader, active in the United Methodist Church, Toastmasters, and her cherished PEO Sisterhood. She and Maurie loved to travel, and upon retirement, the couple hit the road in an Airstream trailer and for the rest of their lives together they travelled our county and the world. They finally settled down in Tucson, AZ. Kathryn spent her last 3 years in Carson City, close to family. Kathryn is survived by daughters Carolyn Still (Orange, CA), Anne Marie Darling (Tucson, AZ), Kathryn Etcheverria (Carson City), son Ward Johnson (Corvallis, OR), seven grandchildren and four great-grandchildren. She was preceded in death by her husband, Herman Maurice Johnson.

The family of Kathryn Jean Johnson created this Life Tributes page to make it easy to share your memories.