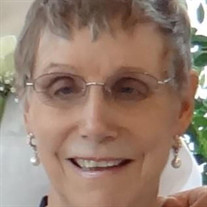 Kathy passed peacefully on June 27th 2021 in Carson City, NV, with family members at her bedside following a lengthy illness. She was born August 26th 1940 to Katherine I. Talbot-Myers and Mose S. Myers in San Francisco, CA, . Kathy survived a tragic childhood which saw her orphaned at ten years of age, along with her older sister, Sandra, and brother, Leonard. Shortly after graduating from Santa Clara High School in June of 1959 she married her life-long love and soulmate, Eual "Ray" Price, a young sailor stationed in the Bay Area. She and Ray settled down in San Jose, CA, and raised three children. Kathy always held a job, sometimes two, to make sure the family’s needs were met and worked tirelessly to ensure her children never knew the hardships she had endured. They were sheltered, fed and loved, and always encouraged to follow their dreams. In her thirties, Kathy went back to college and earned her AA degree in early childhood education, concentrating on the special needs of deaf students. She was an expert in sign language and worked as an interpreter for deaf children at Oster Elementary School in San Jose, CA, for over twenty-five years before joining Ray in retirement. Having both completed successful careers, they then traveled extensively, visiting every state in the Union and putting over 100,000 miles on their RV. Some of Kathy's favorite places included Alaska and Yellowstone Park which her and Ray visited numerous times. Kathy was also a dedicated member of her senior exercise group which she attended several times each week. She and Ray especially enjoyed line dancing with their many friends and fishing together. Ray preceded her in death in 2012 after 53 years of marriage, which Kathy never got over losing the love of her life. In her mid-seventies, she moved to Gardnerville, NV, where she enjoyed new friendships and was a regular at the senior center. She is survived by her sons, David Ray (his wife Susan) and Stephen Benjamin (his wife Yelena), and daughter, Valerie Ann. She is also survived by her four grandchildren, Benjamin, Sean, Brittany and Nicholas, and three greatgrandchildren, Fox, Julia and Livia. They have all benefited from Kathy’s love, determination, fortitude and exemplary life. She was simply a force of nature and will be greatly missed by her family and all who knew her. A private memorial for her and Ray will take place near their favorite fishing spot on the Walker River

The family of Katherine Ann Price created this Life Tributes page to make it easy to share your memories.