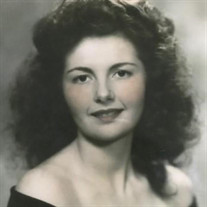 Rosary will be held at St. Teresa of Avila Catholic Church on October 31, 2020 at 10:00AM, Memorial Mass will follow at 11:00AM Joy M. Porteur August 2, 1925 - April 6, 2020 Celebration of Life will be held at Friday, September 11, 2020 Joy Maria Hodges Porteur was born August 2, 1925 in Hollister, California to Clarence and Martha Hodges. She was the last of five children. Her father’s family (Sam and Honey) were ranchers and farmers in Arroyo Seco, San Juan and the Delta. In Hollister, Clarence was a carpenter, a mechanic and a founding member of the first motorcycle club in California. On her mother’s side, Joy was the last surviving grandchild of early San Benito County residents Blaz and Domatilla Maze, and a direct descendent of Margarita Maria, a Carmel Valley Indian girl and Manuel Butron, corporal of the guard for Father Junipero Serra. Sickly as a child, Joy’s family moved to the country for a couple of years for her to recuperate. She never got a bicycle because her parents, still shaken by her brother Milton’s death, were worried it was too dangerous. Joy spoke fondly of life in small town Hollister with her brothers, sisters, many cousins and her terrier dog, Noodles. Joy slept between her sisters June and Olive, often blaming the wet bed on Olive. She was very close to June, who was eight years older and like a little mother to her. Her brother Boy, always the rascal and tease, had his mouth washed out with soap so many times she thought her mother would kill him. Every summer the family went to Arroyo Seco, where her dad was raised as a child, to camp, hunt and fish. One of her first jobs was at Lee’s Hamburgers making 11 1/2 cents an hour. Her last job was at Fort Ord Hospital where she retired in the early 1980s. Joy converted to Catholicism at 18 and her faith was extremely important to her; she wore out many rosaries in her lifetime. She first met her one true love, Dick Porteur, at the carnival when she was 14. She didn’t care for him but changed her tune when she ran into him at the San Juan Dance after he returned from overseas. Dick and Joy married May 16, 1948 in Hollister and honeymooned in Las Vegas and Lake Tahoe. They made a happy life together, raising their three children Kraig, Michele and Lance, in Watsonville, Marina and Salinas; retiring in Pine Mountain Lake and finally Carson City, Nevada. Countless memories were made while gathered around their table, with every guest a reason for celebration and royal treatment. Joy loved to go to the beach, Waikiki her favorite. She and Dick traveled to China, Europe, Alaska and Hawaii, with Joy shopping her way through every trip. The men in her family were hunters but she was the hunter of bargains, always in search of that special gift. Chocolate was her medicine and it worked for her. Fun and flirty, Joy was a real character; thoughtful, kind, gracious, generous and very patient. She always strived to see, with her deep blue eyes, the best in others. Her parents couldn’t have picked a better name for her. She truly was a “joy.” Joy was preceded in death by her parents, her husband of 62 years, Dick Porteur, her sister and brother-in-law June and Chet Wrzos, her brother and sister-in-law Boy and Shorty Hodges, sister Olive, brother Milton and great grandson Elias. Joy is survived by her children Kraig (Liz) Porteur, Michele (Tim) McCandlish, Lance (Toni) Porteur, grandchildren Staci (James) Magdaleno, Garth Porteur, Aaren (Joey) Johnson, great grandchildren Illiana, Ashlyn, Madelyn, Cole, Avery, Lucy and many nieces and nephews, and dear friend Lila Ching.

The family of Joy M. Porteur created this Life Tributes page to make it easy to share your memories.

Rosary will be held at St. Teresa of Avila Catholic Church on...