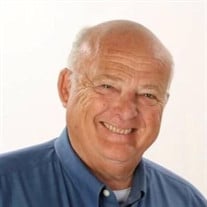 Joseph Dale Wilson, Jr. August 12, 1939 – April 6, 2020 God called Joseph Dale “Joe” Wilson, Jr. to His side on April 6, 2020, at the age of 80 while Joe was at his home in Carson City with his loving wife of nearly 52 years, Mary Wilson, by his side. Joe was born to Joseph Dale Wilson, Sr. and Anna Lou (née Fields) Wilson in Salem, Oregon, where his loving parents raised him along with his two younger brothers, Jim and Jack Wilson. Joe graduated from Oregon State University in 1960 with a degree in chemical engineering. At OSU, he was a proud member of the Sigma Phi Epsilon fraternity. He later earned a master’s degree from the University of Southern California. Upon graduation from Oregon State, Joe was commissioned as a second lieutenant in the United States Army and proudly served in an engineering unit in South Korea. Thereafter, Joe commenced a career with The General Electric Corporation which spanned almost thirty years. While living and working in San Jose, California, Joe met and fell in love with Mary Lee (née Castro) Wilson. They married in Reno, Nevada on June 30, 1968. Joe and Mary had, and lovingly raised together, two sons: Richard Joseph Wilson and Joseph Dale “Ojg” Wilson III. They both deeply loved, respected, and admired their father. In 1986, Joe and Mary moved to Colchester, Vermont where Joe was Vice President of Manufacturing for Bio-Tek Instruments. Joe lived and worked in Italy with Mary for part of his time at Bio-Tek. The couple moved to Nevada in 2002 where Joe was employed until he retired in 2004. Joe and Mary resided in Dayton until 2018, at which time they moved to Carson City. Joe and Mary made many lifelong friendships and were blessed with wonderful and giving neighbors wherever they lived. Throughout his life Joe did volunteer work with several community organizations. He was particularly proud and honored to have volunteered with CASA of Carson City and the Capital City C.I.R.C.L.E.S. Initiative over the past several years. With CASA, Joe served as guardian ad litem for several children who were the subject of child and neglect court proceedings. As part of C.I.R.C.L.E.S., Joe counselled members of the Carson community in an effort to help them elevate from poverty. Joe had several hobbies and interests throughout his life. He was an avid reader, particularly enjoying books on history and novels set in the English countryside. He and Mary enjoyed travelling, and together they visited many places in the U.S. and Europe, including Ireland, the U.K., Italy, Spain, Germany and Portugal. Joe had quite the “green thumb” and took great pleasure in gardening. Fishing and skiing were two hobbies that Joe also enjoyed throughout his life. Most of all, Joe, along with Mary, delighted in the company of family and friends, including at cook-outs at their home where Joe was well known (some may say notorious) for his grilled (some may say charred) chicken and steak. Joe was preceded in death by his parents and his son, Richard (2004), formerly of San Jose, California. Joe is survived by his wife Mary; his son Joseph III and his wife Christine of Arlington, Virginia; his grandchildren, Ronan and Declan Wilson; many nieces and nephews; and his beloved pet dogs, Abbey and Chewie. Joe’s wife and their son Joseph III thank his many friends and relatives for their outpouring of support and kindness in the last few months of Joe’s life and since his passing. They also wish to express their deepest gratitude to his several physicians, especially Dr. Richard Yamamoto and his staff, all of whom provided Joe with excellent and compassionate medical attention during his last years. Special thanks to A Plus Hospice Care (especially Taylor and Sarah), as well as to Gilberto Villanueva and Elena Segura, for the warm and tender care they provided to Joe in his final days. In lieu of flowers, the family asks that donations be made to the American Heart Association, your local SPCA, or your preferred charity. A celebration of Joe’s life will be scheduled at a later date.

The family of Joseph Dale Wilson Jr created this Life Tributes page to make it easy to share your memories.