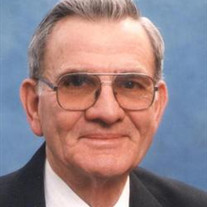 John W. Marvel, a major force in one of the largest ranching operations in Nevada history and among the longest serving members of the state Legislature, died Saturday, March 16 in Carson City. He was 86. John was the business manager and a working cowboy for Battle Mountain-based W.T. Jenkins Co., a cattle and sheep operation started by his grandfather, who emigrated from Wales in the 1880s. The Jenkins ranching empire ultimately stretched over a vast area of northeastern Nevada covering parts of five counties. When Jenkins died near the turn of the century, his wife Edith took over and expanded operations. Later, their young daughter Louise took the reins and ran the business with her husband, Ernest (Cap) Marvel. Eventually, control of ranching operations was shared by John and his brothers, Dick and Tom. The family sold the bulk of its ranch properties in 1964 but John remained active in the livestock industry and worked tirelessly to support those throughout the state who are involved in agricultural enterprises. In 1969, John acquired the Dunphy Ranch in Eureka County and operated it until its sale in 1990. John is a past president of the Nevada Cattlemen’s Association and was among those honored as “Cattleman of the Year.” Because of his contributions to the industry, the new Nevada Department of Agriculture building in Sparks was dedicated to John and his wife Willie in 2010. A conservative Republican, John was first elected to the Nevada Assembly in 1978. He served for 15 regular sessions and nine special sessions and was widely respected for his knowledge of the state and his ability to forge consensus on critical issues. John was minority floor leader in 1993, chairman of Assembly Ways and Means in 1985 and co-chair in 1995. His final term ended in 2008 and he was later honored by being recognized on the Nevada Assembly Wall of Distinction in the Legislature Building. At various times, John’s Assembly District 32 covered parts of Lander, Humboldt, Elko, Eureka, Pershing and Washoe counties. He was a member of the Natural Resources, Agriculture and Mining, Interim Finance and Industrial Programs committees. He also served on the Legislative Committee on Public Lands, Interim Finance’s Advisory Board on Prison Industries and the Audit Subcommittee. John was especially proud of his support for education – including his ability to secure funding for the University of Nevada School of Medicine -- and prison industries and he was considered an expert on Nevada tax policy. He was a member and past chairman of the Nevada Tax Commission and, after leaving the Legislature, served on the Nevada Ethics Commission. He was also on the board of Wells Fargo Bank and on the U.S. Bureau of Land Management’s grazing advisory boards. He was one of five Electoral College voters in the 2004 Presidential election and served on the Advisory Council to the Public Land Law Review Commission. He was also a former chairman of the Lander County Planning Commission. John was extremely active in Republican Party activities and championed GOP causes. He was an active supporter of former Gov. and U.S. Sen. Paul Laxalt in his statewide campaigns and for Ronald Reagan’s presidential campaigns. John was born in Battle Mountain on Sept. 11, 1926 and attended schools there. He earned a bachelor of arts degree, with an emphasis on political science, from the University of Nevada in 1951. He was a member and president of Alpha Tau Omega fraternity and was active in campus organizations. After graduating from Battle Mountain High School in 1944, where John was valedictorian of the senior class, he served in the U.S. Army’s 19th Infantry Regiment during World War II. He was in Japan when that nation surrendered to the Allies. John was honorably discharged in November 1946. He was awarded the Asiatic Pacific Campaign Medal, the Army of Occupation Medal and the World War II Victory Medal. John was a member of several Masonic organizations and was a “Rainbow Dad” for Battle Mountain Assembly 23, International Order of Rainbow for Girls. Also, he was a member of the American Legislative Exchange Council and Western Legislative Conference. In recent years, he adopted Carson City as his second hometown. John is survived by his wife, Wilburta (Willie) Shidler Marvel; daughter Sharon (Tom) Andreasen; son John E. Marvel; daughter Michelle (David) Slagle; brother Thomas J. (Rosita); 10 grandchildren: Amber, Bobby (Rebecca) and Shari Andreasen; Amanda (Darin) Phelps, Dustin Marvel, and their mother, Karen Urriola Marvel; Christopher, Nicholas, Patrick, Jacqueline and Delanie Slagle; one great-grandchild; and numerous nieces and nephews. He was preceded in death by his parents, Louise and E.R. (Cap) Marvel, and brother and sister-in-law, Richard T. and Mary Marvel.

John W. Marvel, a major force in one of the largest ranching operations in Nevada history and among the longest serving members of the state Legislature, died Saturday, March 16 in Carson City. He was 86. John was the business manager and a... View Obituary & Service Information

The family of John Wyland Marvel created this Life Tributes page to make it easy to share your memories.

John W. Marvel, a major force in one of the largest ranching...