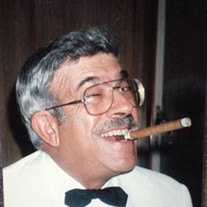 John was born December 24, 1930, and after a brief illness, died July 31, 2013. John spent his youth in New York, attending Bordentown Military Institute and later, Cornell University and NYU, where he received a law degree. He joined the military during the Korean conflict and served his country overseas. He married his beloved wife Barbara in 1957, a union which produced three children. The family moved to Sacramento in 1961 where John worked at Aerojet while also running a chain of dry cleaning stores. Later, he moved into the IT staffing industry, becoming President of Telos Consulting Services. When Telos became so successful it was purchased by a larger firm. John decided to retire and he and Barbara moved to Carson City, Nevada, a town that had charmed them when they had passed through on their way from New York to California many years before. During retirement, he kept busy by writing novels, taking vacations, and lunching with friends. John was bigger than life; a man of great charm who made friends everywhere he went. He never met a waitress he didn't flirt with, a server he didn't tip big, or saw a check that wasn't his to pay. Barbara, his wife of over 50 years, was his great love, followed distantly by his little dog and companion, Skippy, who comforted him greatly after Barbara's death. John is survived by his sister, Pat Donath of Connecticut, brother Bill Silberman of Texas and children: Ann Mary Silberman of Sacramento, Tracy Jane Frick of Murrieta, and John Patrick Silberman of Cotati as well as his grandchildren: Cody Charfauros, Christopher Silberman, Matthew Kempster, Zackary Silberman, Alexander Silberman and Kayley Silberman. Right before his passing, he had the pleasure of meeting his first great-grandchild, Ethan Charfauros. John said towards the end that he had a wonderful life, full of great failures and great successes. He forgot to mention that he also had a life full of people who adored him.

John was born December 24, 1930, and after a brief illness, died July 31, 2013. John spent his youth in New York, attending Bordentown Military Institute and later, Cornell University and NYU, where he received a law degree. He joined the... View Obituary & Service Information

The family of John Karl Silberman created this Life Tributes page to make it easy to share your memories.