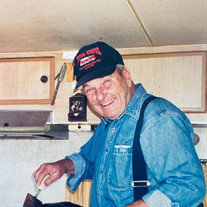 John Hunter 81, died January 19, 2021. He was preceded in death by his parents Muriel H. Hunter and Webster B. Hunter and his brother Richard W. Hunter, Sr. He is survived by his wife of 60 years, Charmalee Dow Hunter. His children, Rosemary Cowen (Loren Cowen) and Thomas Hunter (Lenee Hunter). His grandchildren Elizabeth Krater (Andrew Krater), Charles Cowen, Hogan Hunter and Alexia Hunter. John was born and raised in Reno and graduated from Reno High in 1957. His senior year, he attained the rank of JROTC Brigade Commander of the Huskie Battalion. He also was the Captain of the Reno High Rifle Team which served him well. After high school, he became a Marine Corps reservist. He then earned a Bachelors Degree and Masters Degree from UNR. He participated in their ROTC and later joined the Army as a Lieutenant, where he was a Artillery Battery Commander at Fort Lewis WA. He loved his grandchildren very much (Elizabeth, Charlie, Hogan and Alexia) and spent as much time as he could with them. He loved spending time with family. He spent many hours at Pyramid, Tahoe and Fallon hunting and fishing. John enjoyed telling stories about growing up in Reno and living in Nevada. He retired from Carson High School after 30 years. He Coached for many years and for some time you could hear him announcing Football games on Friday nights. He loved teaching, Chemistry was his favorite. You would be hard pressed to find a family that didn’t have at least one member that had had him as a Teacher. He often told stories about his time at Carson High. After his retirement he was able to spend more time with his family, grand-children and friends. John was always there to help out and always had his hammer and nails handy. He built the house he lived in. He liked to work with wood and kept busy with many projects. You can even see the arches that he made for Carson City at the Park on Rice and Carson Street. For many years he would hunt, fish or shoot his favorite guns, most every day. He would often leave school on a Friday and either go fishing at Pyramid Lake or duck hunting in Fallon. His love of the outdoors was passed on to his children and grandchildren. No services are scheduled at this time. Please visit autumnfuneral.com to leave comments and memories.

John Hunter 81, died January 19, 2021. He was preceded in death by his parents Muriel H. Hunter and Webster B. Hunter and his brother Richard W. Hunter, Sr. He is survived by his wife of 60 years, Charmalee Dow Hunter. His children, Rosemary... View Obituary & Service Information

The family of John Hogan Hunter created this Life Tributes page to make it easy to share your memories.