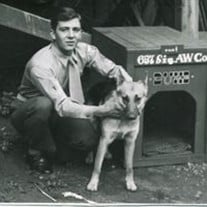 Long time Carson City resident, John A. Giannotta, passed away on March 22, 2012. He was born on September 13, 1923 in San Jose, California. John was preceded in death by Helen, his beloved wife of 64 years, and granddaughter Debbie Baskin. He is survived by his daughters Sharon Howard (Rick), Sandy Jacopetti, Susan Davis (Phil), and Shelley Giannotta, sisters Dorothy Kosowski and Michele Jade Harvey, Half Brother Clifford Neal,and 9 grandchildren and 18 great grandchildren. “Fast Talking” John, as he was affectionately known by friends and business associates, was one of America’s “Greatest Generation” serving with the 99th Infantry Division during the Battle of the Bulge and in Germany and Belgium. Returning from the war, John worked as a carpenter during the day and by night pursued his Associate’s degree in the carpentry trade. He became a successful building contractor in Santa Clara County until 1968 when he relocated to the Lake Tahoe basin building custom homes, as well as a dream home for his family in Lake Tahoe, Nevada. He was a member of the Carson Valley Contractor’s Association for over 30 years and held the position of president for 4 of those years. John was an active member of the Elk’s Lodge for 40 years leading and participating in numerous fundraisers and benevolent activities in support of the Lake Tahoe and Carson Valley communities. He valued the camaraderie, enduring friendships, and the brotherhood of his fellow Elks. Over a span of 17 years, John and “his Helen” took pride in volunteering their time and energy making 500 trips from Carson City to the Reno Veteran’s hospital to distribute donated books, magazines, flags, and toiletries to hospitalized veterans. In addition to his volunteer work, John’s favorite hobbies included golfing, gardening, collecting stamps and family photos, reading, and playing Yahtzee. John had a lifelong passion and love for all animals. As a youth, he raised rabbits, chicken, and homing pigeons. Over the course of his life, John had a variety of dogs including his beloved German shepherd, Thor, numerous cats, Ricky the skunk, and assorted other animals. John, larger than life, and having lived his life to the fullest, leaves behind a legacy of enduring love and friendship, honesty, hard work, and loyalty. With his huge heart, he saw the good in everyone and never met a stranger. John was a wonderful and loving husband, father, and grandfather, beloved and cherished by all and will be greatly missed.

Long time Carson City resident, John A. Giannotta, passed away on March 22, 2012. He was born on September 13, 1923 in San Jose, California. John was preceded in death by Helen, his beloved wife of 64 years, and granddaughter Debbie Baskin.... View Obituary & Service Information

The family of John Anthony Giannotta created this Life Tributes page to make it easy to share your memories.