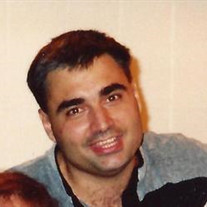 John Anthony Fazi, 54 died January 23, 2013 in Carson City, Nevada. John was born in Buffalo, New York, May 1, 1958. He spent most of his school years in Castleton, New York in upstate Albany. His fondest childhood memories were of Castleton and his second family, the McCabe’s. He was on the wrestling and football team at Maple Hill High School. Joe “Coach McCabe” was his mentor. John joined the Army in 1976 until 1981 and was stationed in Germany. He brought back a British green 1976 MG Midget that was a prize possession of his until he ran it into the ground. John will be buried at the Southern Nevada Memorial Cemetery in Boulder City, Nevada. John attended UNLV from 1984-2005. What seemed like an eternity of schooling and hundreds of credits, he finally found what he loved to do. He received his Bachelor of Science in Special Education in 1996 and his Master of Science in Special Education in 2005. He loved to teach. His specialty areas were Autism and Severely Emotionally Challenged students. John coached football, wrestling, volleyball and track and field. He loved being a coach and mentoring students. Second to John’s dog Maggie (and Millie), his nieces, Bailey and Brynley and nephew, Benjamin brought him the most joy in life. They made him very proud. When Ben and Brynley were starting kindergarten he made sure he was there to video tape them. He coached Bailey’s first soccer team. He was a loving and doting uncle. John’s dog Millie was his first beloved black Labrador. When she died, John’s heart was broken and he got Maggie. He loved, loved, loved her. Maggie provided the companionship and unconditional love that only pets do best. He treated her like she was his child. John’s sister, Michelle was always his “baby sister”. With a 10 year age difference, John was forever protective, but it was usually Michelle who took care of John. She loved him. John called Bryant, Michelle’s husband, his “favorite brother-in-law”. Of course, Bryant was his only brother-in-law. John was loved immeasurably by his parents and they will forever miss him. John took his own life. We hope that being courageous and honest about his death that someone may listen and realize that mental illness is a deadly and silent disease. Suicide is the 10th leading cause of death in the United States according to the Centers for Disease Control. To us, this is too frequent and too increasing to ignore. By omitting his cause of death allows mental illness to remain impersonal and a silent killer. As his family, we would hope that being painfully honest, allows something positive to emerge from our devastating loss. We want John to be remembered for what he loved, how he lived his life, the people he loved and all the good things he did. He was more than just John Fazi, he was a good son, a loving uncle and a great brother and brother-in-law. He was “our” John. John is survived by his parents, Rudolph and Catherine Fazi, sister, Michelle Fazi Godfrey (Bryant), nephew, Benjamin Godfrey and nieces, Bailey and Brynley Godfrey.

John Anthony Fazi, 54 died January 23, 2013 in Carson City, Nevada. John was born in Buffalo, New York, May 1, 1958. He spent most of his school years in Castleton, New York in upstate Albany. His fondest childhood memories were of Castleton... View Obituary & Service Information

The family of John Anthony Fazi created this Life Tributes page to make it easy to share your memories.