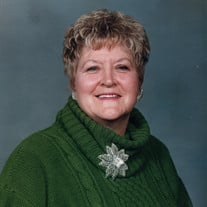 Joan Haskins 1933 - 2019 Joan was born to Sam and Effie Gritten on December 27, 1933 in Catlin, Illinois. She was the youngest of the ten children. The Grittens soon moved to nearby Danville and took up residence on Dakota Street. Joan attended Danville schools and excelled in athletics, especially in basketball and track. Joan loved school, but was forced to leave school to care for her ailing mother. Joan would later finish her high school requirements and earn her G.E.D. It was about 1950, when Joan and her friend were asked out on a double date. Joan's date turned out to be the captain of the '49 Danville High School football team, Kenny Haskins. The big spenders took their dates to Steak 'n Shake. For Kenny, it was love at first sight and for Joan, it was more than the chili that warmed her heart. A whirlwind courtship ensued and on February 23, 1951, Ken and Joan were married. He was nineteen and Joan was just seventeen. People said that it wouldn't last, but their marriage thrived for nearly sixty nine years until Joan's death on New Year's Eve of 2019. Joan was a loving wife and a wonderful mother, grandmother and great-grandmother. Joan loved the role of "Mom." On more than one occasion, she would say, "God put me here to be a mother for my two sons." Family was so important to Joan that every vacation was a family vacation and Joan always called Ken, "Dad," and Ken referred to Joan as "Mom." For sons, Ken Jr. and Tony, "Mom" made home a bit of heaven on earth. Ken and Joan moved to Simi Valley, CA. in the early '60s. Both worked, but always made family time a top priority. Meals were always family gatherings and Ken and Joan were always in attendance for their children's school programs and athletic contests. The Haskins home was always open ad was a second home for many of Ken Jr. and Tony's friends. Church life was always important to Joan. Involved in most aspects of church life, Joan especially loved to work in the nursery. She would become "Grandma Joan" to many of God's children over the years. Joan made home an inviting and beautiful place. She loved to garden and always had a spectacular display of color every spring and summer in her back yard. Her patio became "the place" for get-togethers. Joan loved animals and always had pampered and spoiled pets around the house. Joan was a magnificent cook and loved to prepare large meals for family and friends, especially at Thanksgiving and Christmas. As for Christmas, nobody enjoyed it more than Joan. Every room in the house would be decorated and Christmas music would play form Nevada Day to February 1st! Joan worked most of her adult life in both the private and public sectors, however, it will always be her love of family, friends and church that will be her glory. She was a remarkable woman. Heaven is now her home and better for her presence. Joan is survived by her husband of 68 years, Ken Sr. She is also survived by her children, grandchildren, great-grandchildren and many more who were privileged to refer to her as "Mom" or "Grandma."

Joan Haskins 1933 - 2019 Joan was born to Sam and Effie Gritten on December 27, 1933 in Catlin, Illinois. She was the youngest of the ten children. The Grittens soon moved to nearby Danville and took up residence on Dakota Street. Joan... View Obituary & Service Information

The family of Joan Haskins created this Life Tributes page to make it easy to share your memories.

Joan was born to Sam and Effie Gritten...