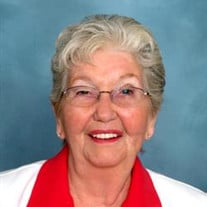 Joan G. Knowles, 80, of Carson City, Nevada, ended her life’s journey on Monday, October 21, 2013. Joan was born in Cortez, Colorado on November 29, 1932. She graduated from Montezuma Cortez High School. Joan was married to Richard J. (Dick) Knowles on December 30, 1953 and they were married over 40 years. Joan is preceded in death by her husband, Dick, who passed away in 1998 in Texas. Joan had enjoyed her career as an Appraiser and Real Estate Agent in the Carson City area and had recently retired. Joan enjoyed politics and watching football and baseball. Joan’s most enjoyable pastime was researching the various family lines in Genealogy. Joan is survived by her brother, Newell Goodall and wife Barbara of TN, sister Judy Baros and husband Bernie and brother Rick Goodall and wife Geri all of CO, sister Jeannie Counihan and husband Tom of PA; her four children, Peggy Knowles Troupe Bohn and husband Dale, Richard D. (Rick) Knowles and wife Donel all of Carson City, NV, Robert M. (Bob) Knowles and Kristi Knowles and husband Adam Bushong all of Austin, TX; granddaughter Ryan Knowles Budde of IN and grandsons James and Jason Knowles and Josh Troupe all of Carson City, NV, and numerous nieces, nephews, cousins and friends. The family of Joan wishes to thank all of the Physicians and staff in the Carson City and Reno areas and all of her family, friends and former colleagues. You helped to make her life journey more complete

The family of Joan Goodall Knowles created this Life Tributes page to make it easy to share your memories.