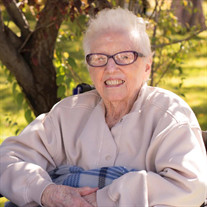 Jeanne M. Smith, 91, of Carson City, Nevada, passed away on September 24, 2020. Jeanne was born on Staten Island in 1929 to John and Janet Morrison, originally from Scotland. She grew up in Brooklyn, NY, and was active in her local church. She worked as a telephone operator and in the personnel office of a watch company. She attended Kentucky Christian College and graduated with a Bachelor’s Degree in 1953. She obtained a Master’s Degree in Education from Butler University in 1956. After graduation, she was offered a position as a teacher at Christian Day School in San Fernando, CA. She married Dale Barbe in 1960. She had daughter Janet in 1961 and son Bill in 1963. Dale tragically passed away in 1964. Jeanne continually taught at Christian Day only taking time off to have her children. In 1967, she married J.B. Smith and they were together for almost 50 years. Upon retirement in 1990, they moved to Gardnerville NV to be closer to Janet and their grandchildren. They lived in Gardnerville until J.B. passed away in 2017. Jeanne moved to Carson City, then Reno, but was back in Carson City when she passed. She was the last surviving member of six children; Gerald (2018), Margaret (1926), Jack (1996), Robert (2012) and Charles (1943). Jeanne was loved by many nieces, nephews, step-grandchildren, and extended family members. She is remembered as a loving mother, grandmother, aunt, and friend. She greatly influenced many students throughout her years of teaching. She is survived by her daughter, Janet Barbe-Kinney; son, Bill Barbe; stepson, Phillip Barbe; granddaughters, Sarah Peterson-Hults and Holly Peterson; and great-granddaughter, Rilynn Hults. On Saturday, October 17, 2020, at 10:30 a.m., a memorial service will be held at Heritage Park, 1447 Courthouse St, Gardnerville, NV. Jeanne had a fondness for cats. In place of flowers, please make donations to the Nevada Humane Society in memory of Jeanne Smith. Nevada Humane Society 2825 Longley Ln., Suite B Reno, NV 89502-5942 www.nevadahumanesociety.org

Jeanne M. Smith, 91, of Carson City, Nevada, passed away on September 24, 2020. Jeanne was born on Staten Island in 1929 to John and Janet Morrison, originally from Scotland. She grew up in Brooklyn, NY, and was active in her local church.... View Obituary & Service Information

The family of Jeanne Marguerite Smith created this Life Tributes page to make it easy to share your memories.