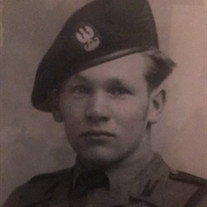 Jan was born on his family farm in Ogrodzona, Śląskie, Poland on August 29, 1925. He was the oldest of four children who all worked the family farm. He grew up at a time where hard work, discipline and family values were instilled in him at a young age. He credited his sharp mind and deep intellect to the intensive education received in his native Poland.  Two days after his 14th birthday in 1939 the Germans began their invasion by crossing the border very close to his hometown. 3 years later the Nazis conscripted him and his fellow friends as forced laborers. He was fortunate enough to be transported to France rather than the Eastern Front where there was more carnage than anywhere else. While in France he came into contact with a Polish-Frenchman whom was able to hide him from the Germans and later connected him with the French-Resistance. They eventually were able to get him to Great Britain where he joined up with the rest of the Allied Forces of Europe. While there, he got linked back up with the Polish Free Army and trained with them in Britain for the eventual takeover of Europe on D-Day. On D-Day, he came ashore at Juneau Beach alongside the Canadians and the British. After victory in Europe, he became a part of the rebuilding effort in Germany. In 1947, he went back to Britain and got involved in the construction trades where he was able to use his background as a tank operator to use heavy-equipment.  In 1952, President Harry Truman made the decision to allow anyone who fought for the Allies to immigrate to the United States. He came across on the Queen Mary with a nurse he met during the war named Elfrieda Stamm and later settled in the Chicago area where they later married in about 1953. On March 3, 1954 they had their first child, a boy, Johnny. And their second child, a girl, Rosemary (Ruzia as he said), on February 13, 1955. Sadly, their marriage did not last and he was left with two young infants.  His first few years in Chicago were a struggle where he had various construction jobs, but he eventually landed a job with the Chicago Transit Authority as a laborer. This would be his lifelong job and he quickly became a valued employee and moved his way up the ranks. He worked there until he retired in 1982. He traveled the country and Canada extensively with his third wife Adrienne with whom he was married to until her death in 2011. Soon thereafter he moved west to Nevada to be with his daughter, Rose, and her family. He was able to make one final trip back to his native Poland in the fall of 2013.  In his later years, he remained very social and loved to talk about his travels, politics and anything else he found himself interested in. He always found an immense amount of joy in seeing the wild horses of Nevada as they reminded him of his family farm back in Poland. He will always be remembered as a man of great pride, great courage, a man without fear by his many family and friends. He is survived by his Son, Johnny in Wisconsin; His daughter, Rose and her husband Bill of Dayton, Nevada; His Grandsons Doug in Montana, Josh in Reno Nevada, Shawn, Chris, both in Illinois, & Jeff and Becky in North Carolina; And his great-grandson Bronson of Montana.  His entire family in Poland who regard him as a rockstar.  Our love for you will remain unending!  Always.

Jan was born on his family farm in Ogrodzona, &#346;l&#261;skie, Poland on August 29, 1925. He was the oldest of four children who all worked the family farm. He grew up at a time where hard work, discipline and family values were instilled... View Obituary & Service Information

The family of Jan Broda created this Life Tributes page to make it easy to share your memories.

Jan was born on his family farm in Ogrodzona, Śląskie, Poland...